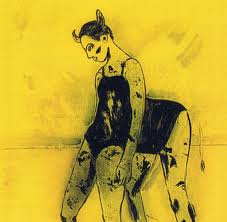 Latest evidence of what a strange and wonderful world we live in: a Japanese group called Quikion based on accordion, concertina, bouzouki, psaltery, toy instruments – oh, and a bit of acoustic guitar. More than half the tracks are original, with the others based on traditional music from Pakistan, Romania, Serbia, and England, as well as Kurt Weill’s “Ballade von der Höllen-Lili.” The female vocals seem to be mostly in Japanese, regardless of the melodic sources. The mood ranges from bouncy and energetic to quiet and reflective, and the humor, in spite of the occasional use of a squeaky toy as a percussion instrument, is not overwhelmingly silly. Most of the arrangements center around accordion or concertina and acoustic guitar or bouzouki; the other instruments carry or share the melodies. I can picture this music being played in a café on a thriving international space station, where cultures mix and blend indiscriminately and the listeners don’t especially care what languages the singers use. It’s refreshing to see how inventive musicians can be even given only a palette of acoustic instruments. And they produce what’s become one of my favorite versions of the English folksong “The Cuckoo,” though singing it in Japanese certainly changes its flavor. While its origin may be outside the “world music” establishment, this band should appeal to fans of Balkan and Middle Eastern music as well as European folk.