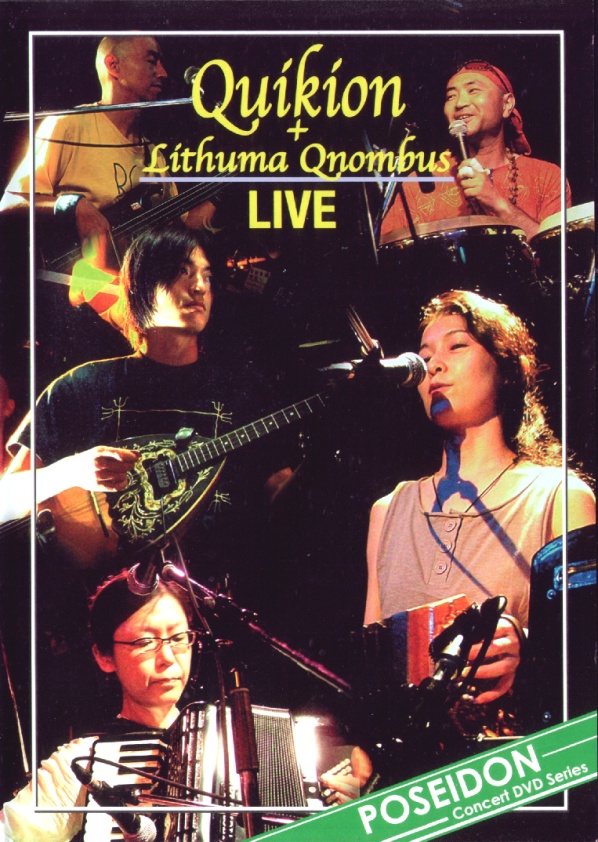 The three members of Quikion join with the two-man rhythm section Lithuma Qnombus for this 72 minute live set from March 2005 in Tokyo’s Manda-La2. Playing acoustic and electric guitars, bouzouki, bass, conventional drums as well as a hand drum kit and percussion, multi-glockenspiels, zither, accordion, harmonium, and concertina, the focal point of the band centers around primary vocalist Totoki Yukiko. Their style is essentially folk-driven, often very quiet, gentle and introspective, but can morph seamlessly into full throttle rock in a very tasteful way, while the group injects power and feeling into every measure. Throughout their set, Japanese melodic themes and rhythms are interwoven with western traditional styles, including those seemingly of Middle Eastern and Eastern European origin – even a couple polkas, though all but three of the songs are originals. Some of the highlights include a vocalizing interchange between Yukiko and bassist Kajiyama Shu, and the opening bonus track where Yukiko’s voice is accompanied only by bass guitar, which slowly morphs into a beautiful and shimmering rendition of the French traditional “Briolage.” This DVD is a completely professional multi-camera shoot, with plenty of close-ups that capture intimate moments with each of the players, and would certainly make for a great introduction to this band. Somebody needs to bring this band over for a North American festival appearance!