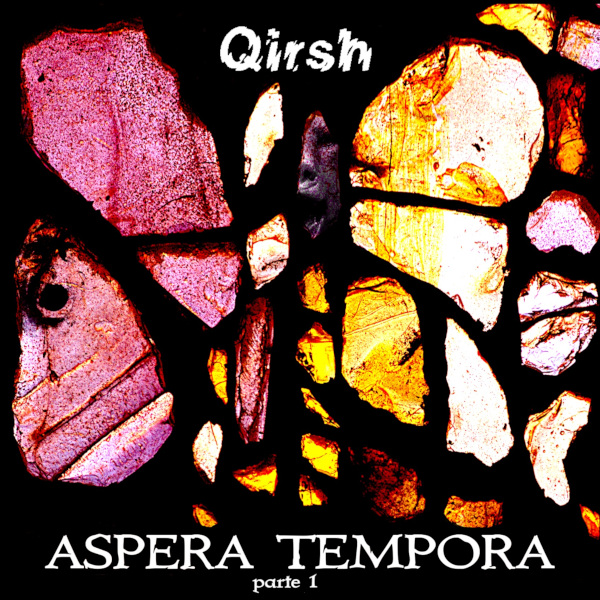 Qirsh is an Italian seven-piece band from Savona that’s been around for about 27 years, mostly a group of old friends from school, with a couple more added early in the ensuing years. Aspera Tempora is their third album, a concept album based on human fears – fear of loneliness, fear of heights, fear of rumors, fear of pain, fear of God’s judgement, and more, and based on the full title this is obviously the first installment of at least two parts, but you know how that sometimes goes. Their sound offers a strong, but atypical progressive feel, combining the core prog elements of rock, including multiple keyboards and electronic elements, multi-part vocal harmonies (often coming together in very interesting ways), all inside a restless compositional style that seems to be forever changing, each piece evolving as it proceeds. Every member of the group plays an instrument, there is no dedicated singer, but the lead singer Pasquale Aricò also plays keyboards, as well as Leonardo Digilio (credited with keyboards, piano, and synth), plus Daniele Olia (guitars, keyboards, lute, and vocals), Andrea Torello (bass and vocals), guitarist Michele Torello, drummer Marco Fazio, along with drummer and percussionist Giulio Mondo, all making seven. Throughout the album’s seven tracks, there is no shortage of originality to be found; they offer a very contemporary progressive style that doesn’t sound like neo-prog (especially with two drummers) or some collection of 60s or 70s relics. It’s a forward oriented and very original style that has all the right elements. The amazing sidelong opener “Rumors” makes great use of the band’s vast keyboard and vocal arsenal, yet it’s the composition and overall arrangements that are the standouts here, morphing as it goes, with some very unusual vocals at around the nine minute mark. Starting with an strummy acoustic guitar figure, “Quel Momento” eventually gives way to piano and synths and a pounding heartbeat before the multi-part vocals enter midway through. The twenty-plus minute two-part closer “Oremus” deals with the oldest fear of all – the fear of death, a ticking clock-like percussive sound leads the listener into its strange universe, which includes an upbeat dance-like section and a protracted bolero-like section of heavy organ and layered voices. All taken, Aspera Tempora Parte 1 is an extraordinary album that moves the spirit on any number of levels.

David Cross - Testing to Destruction – Cross was, of course, the longtime violinist with King Crimson Mk2; I mention this first because Testing for Destruction bears more in common with that edition of KC than probably either of his two...  (1995) » Read more

Can DarWin Escape the Maze?