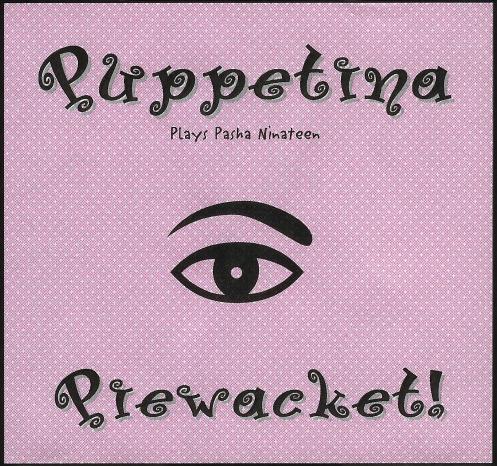 I first listened to this CD without any knowledge of who Puppetina were. My guess was that they were a folk ensemble from the Balkans who were, as an experiment by some half-mad, half-genius producer, cast into the studio with a bunch of Parisian avant-gardistes. In fact, Puppetina is the all-American duo of vocalist Anna Homler and multi-instrumentalist Stephanie Payne, who’s got a number of releases to her name as part of Dark Arts. Together, the two combine their talents to produce a wonderfully strange disc that is not quite like anything I’ve ever heard before. Homler sings entirely in made-up nonsense languages that nonetheless evoke the feel of ‘real’ tongues. Her voice is most often a melodious, slightly nasal alto vaguely reminiscent of East European folk singing. However, she frequently abandons ‘normal’ vocals to instead deliver whispers, chants, and spoken-word vocals (again — entirely in made-up languages), sounding vaguely like an unholy cross between Martha Sebastyén, Diamanda Galás, and Peter Hammill. Behind Homler’s nonsensical yet beautiful vocals, Payne utilizes a bewildering range of instruments, toys, found objects, and unidentifiable devices to produce the sonorous backdrops for the vocals. Ethnic instruments, like the hurdy-gurdy, accordion, and African thumb m’bira feature prominently in the arrangements, as do toy instruments, circus calliopes, kitchen timers, sirens, walkie-talkie static, and strange and unidentifiable thumpings, whirrings, burblings, and buzzings. The overall effect is original, quirky, playful, and a whole lot of fun. Highly recommended.