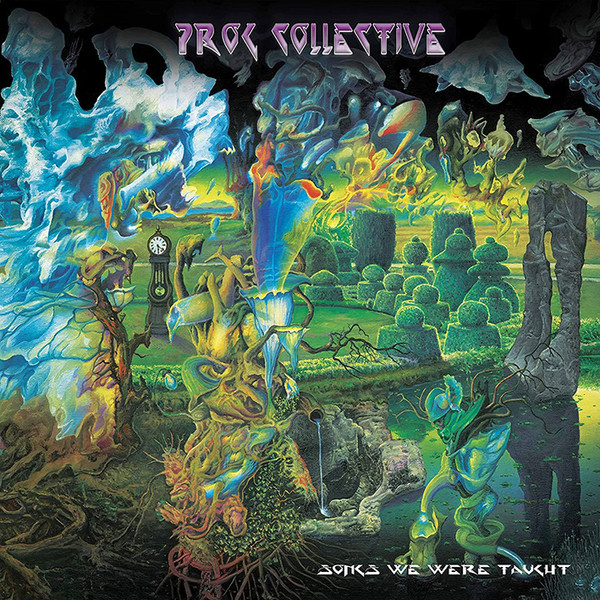 To my mind, the trick to successful cover songs is changing them enough to bring something new to the game while still mostly honoring the spirit of the original. Like any way of judging music, these are subjective criteria, so others may disagree with me on what works and what doesn’t. In this review I’m going to look at two recently released albums of covers. First up is Prog Collective’s Songs We Were Taught, which, like Worlds on Hold, seems to consist of Billy Sherwood and various musicians from his extensive contact list. David Clayton-Thomas (Blood Sweat & Tears), Rod Argent (The Zombies), Sonja Kristina (Curved Air), Candice Night (Blackmore's Night), Dweezil Zappa, Ron "Bumblefoot" Thal (Guns N' Roses, Asia), Steve Morse (Deep Purple, Dixie Dregs), Martin Barre (Jethro Tull), Steve Hillage (Gong), Geoff Downes (Yes, Asia), Jon Davison (Yes), Roine Stolt (Flower Kings), and more all show up for a song apiece, and they cover well-known tunes from Simon and Garfunkel, Al Stewart, Caravan, Seals and Crofts, James Taylor, The Band, Cat Stevens (Yusuf Islam). Carole King, and Bob Dylan. They’re done in a modern, highly produced style with big drums, crunchy guitars, and thick keyboards augmented by the special talents (be they vocal or instrumental) of the track-specific guests. There’s a certain novelty to “The Sound of Silence” interpreted as a late-70s Yes tune, but I find the novelty wears thin after a few tracks of the same thing with different singers. “In the Land of Grey and Pink” gets bonus points for being the one track that isn’t really a mainstream classic. Still, I find my attention wandering within a few seconds of each track’s start, and I’m unlikely to revisit any of these versions.

Some readers may remember Mary Fahl from a couple of albums by October Project back in the early 90s. Her beautiful voice was one of that group’s primary draws, along with their lovely arrangements featuring strings and other instruments. She released a full “reminagining” of Pink Floyd’s Dark Side of the Moon a while ago, though I’ve only heard a few excerpts from it. On Can’t Get It out of My Head she tackles a variety of songs of varying familiarity, and they’re all done in a lovely chamber pop style with string arrangements by Mark Doyl, who provides the guitars, bass, and keyboards himself. A six-member string ensemble fills out the sound, along with occasional vibraphone. As a sort of follow-on from her previous Pink Floyd tribute, she does a nice version of “Comfortably Numb.” Other tunes come from ELO (the title track), Rolling Stones (“Ruby Tuesday”), Moody Blues (“Tuesday Afternoon”), Nick Drake (“River Man”), The Mamas and the Papas (“Got a Feelin’”), Neil Young (“Don’t Let It Get You Down”), Judy Collins (“Since You Asked”), George Harrison (“Beware of Darkness”), and Richard Thompson (“The Great Valerio”). And while they’re all done with a similar aesthetic, the album as a whole is quite enjoyable, and I find myself coming back to these versions. Her take of “The Great Valerio” is particularly notable, with hints of electronic percussion heightening an eerie mood. Can’t Get It out of My Head is a fine album that I highly recommend.