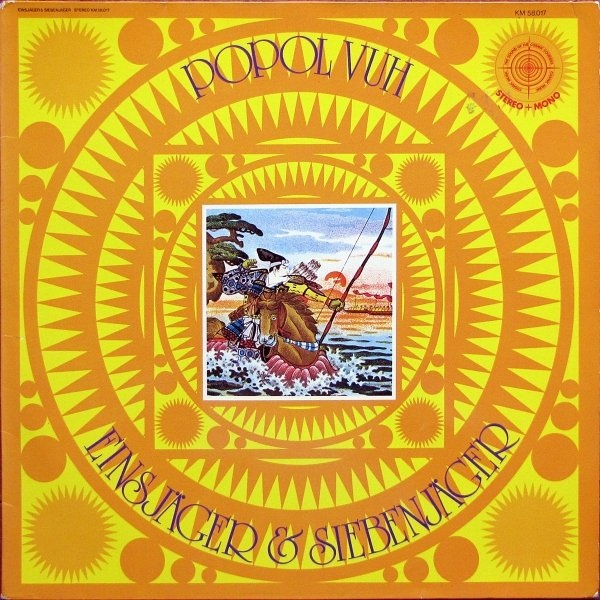 Popol Vuh was one of the great spiritually-minded groups of the 70s, producing a great run of albums that started with a couple of early "big Moog" electronic albums before leader Florian Fricke sold the synth to Klaus Schulze and embarked on a completely different tangent on Hosianna Mantra. Along this string of immensely uplifting releases — and really uplifting should be underlined here as so much progressive music from the era and country tends to explorer darker places — is probably the peak of the era, the great Einsjäger & Siebenjäger. This album is perhaps notable for the side-long title track which could be the group's (and when I say group I mean (mostly) Fricke on piano / spinet, the amazingly talented Daniel Fischlscher doubling on guitar and percussion, and vocalist Djong Yun) peak moment, a clinic on dynamics and mood. There are a lot of great shorter Popol Vuh tracks (“King Minos” comes to mind here), but the title track is likely the piece I'd play to any newcomer to introduce them to this sound (although were I in an electronically inclined mood I'd go with the second album's "Vuh"). The music centers around Fricke's excellent piano playing, but he found a like-minded soul with Fischelscher and something I've always wondered is how they laid down the tracks given the latter plays two or more parts. There's a real sense of purity with the band's music that's almost impossible to describe unless you hear it. This is long before cynicism and post-modernism set in and there's a real sense of devotion in play that is deeply affecting. It reminds you that kosmische music spanned a wide range that, perhaps had the psychedelic / acid rock groups on one end and quieter, more introspective groups like Popol Vuh and Between at the other. This is essential music, compulsory if you explore.