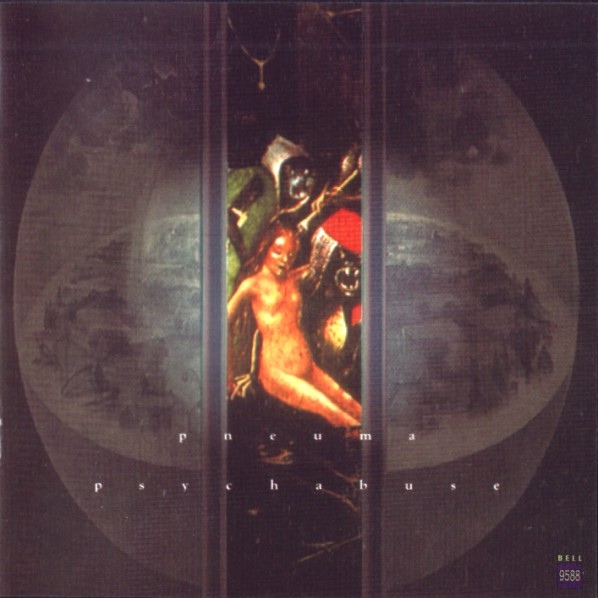 The release of Pneuma's CD represents a much-needed effort at filling the gaps in the huge hole that has opened up in Japan with this genre: that of the solo electronic / synth. artist. For other than Kitaro, Akira Ito, and Fumio Miyashita, I can think of only a few scattered remnants of this style over the last ten or fifteen years. Cosmic electronic music just doesn't seem to be in big demand in Japan. Currently the leader of Trembling Strain, Hiroyuki Shimada went by the monicker "Pneuma" during the 80s, when most of this music was recorded. However it sat unreleased until now. There is quite a lot of music on Psychabuse: a couple pieces near the twenty-minute mark, plus three more at about eleven minutes each. "Symbiophony" and "Penumbra of Passed Phases" seem to recall Klaus Schulze in his Mirage era, a little too repetitive. But later, on "Moment of Awakening," he presents a different perspective, that includes some acoustics: hand drums and flutes, etc. This is where Pneuma's uniqueness shines the most, closer to the territory of his Trembling Strain project. As the album progresses he introduces Japanese melodies and it really blossoms into a truly Japan-esque work. It's refreshing to see the synthesizer music medium finally acknowledged in Japan. Kudos to Pneuma, and to Belle Antique for unearthing this one.

A repetitive pattern recalling the spirit of "Tubular Bells" introduces the listener, continuing long after its worn out it's welcome, creating a nervous tension – nothing could go on this way forever, something has to happen here – and indeed it finally does, like a blossoming flower, intoxicating pulsating waves pushing in and out like the tides, as colorful synthetic patterns dance across a pastel sky. Finally, the gongs and hand drums kick in, offering some earthly substance as a tether for your cerebral meanderings. So goes the opener "Symbiophony" on the latest release by Japanese cosmic/trance wizard Pneuma. He plays an array of synthesizers, sequencers, rhythm machines, and other electronic devices, as well as acoustic instruments (gongs, tabla, santoor, e-bow, bottle percussion, ocarina) and voices. The five tracks range from ten to twenty minutes each, mysterious and compelling soundscapes that develop and change gradually over time, yet each is unique unto itself. Fans of early Rich, Schulze and Lightwave are sure to appreciate where Pneuma is coming from. Although these tracks were originally recorded in the period from 1979-85, this is the first time they've seen official release. Recommended!