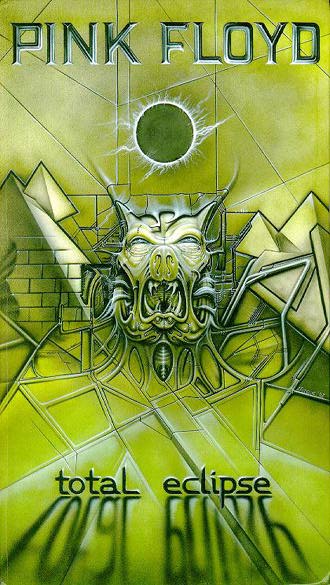 Sometime last year Pink Floyd released some sort of 25th anniversary collectors box set, the title eludes me at the moment, but the content does not: it was simply a bunch of their regular albums repackaged in some new clothing, with one extra disc - the contents of which had already been released on CD in one form or other, either on Relics or the widely available Westwood-One A CD Full of Secrets. Basically nothing new, except claims of improved sound and 'remastering,' the new ploy by the big record companies to extort more of our hard earned money. For any longtime fans who were profoundly disappointed with that set, then Total Eclipse is for you! This recent Italian-import 4 CD set is exactly what the 25th anniversary set should have been. The four discs are housed in a foldapart binder with a 36 page full-color booklet in the middle, with a brief history of the band and details of all the included tracks, nearly all of which are unavailable on any other discs: Early singles, unreleased singles, B-Sides, alternate takes, demo versions, and live material.

Disc one concentrates entirely on Barrett era material. Included here are early singles "Arnold Layne" and "See Emily Play," as well as the B-side of the former "Candy and a Currant Bun." Also here is the US single of "Flaming," early singles "Apples and Oranges" and "It Would Be So Nice," as well as the A and B sides of the single that was never to be: "Scream Thy Last Scream" and "Vegetable Man." The balance of the first disc is made up of recordings from the Top Gear show made between '67 and '69, and "Nick's Boogie," a studio outtake from the film score Tonight Let's all Make Love in London. Sound quality for the studio material is excellent, and for the Top Gear material, is surprisingly good considering the state of live recording in 1967.

The second disc moves onward as the band lost Barrett and gained Gilmour, and began searching for new directions. Here we have more recordings from Top Gear: "Green Is the Color," "The Narrow Way," "Embryo" and the epic "Careful With That Axe, Eugene." There are three studio outtakes from the Zabriskie Point soundtrack: "Oneone," "Fingal's Cave," and "Rain in the Country," heretofore available on the Omayyad bootleg LP. "Cave" is probably the low-point - sound quality-wise - of the entire set, marred by a massive dropout right after the song starts. A live take of another Zabriskie outtake, "The Violence Sequence," would evolve into "Us and Them" two years later. Disc two is topped off by an eleven minute live version of "Cymbaline" (from More) followed by a live take of "Atom Heart Mother" sans orchestra.

Your third disc is mostly live material from the Dark Side of the Moon through Wish You Were Here period, featuring early 1970 recordings of "Breathe" and "On the Run," a quadraphonic mix of "Brain Damage/Eclipse," a 24 minute live take of "Shine on Crazy Diamond, Parts 1-5," an acoustic demo take of "Money," and '75 live takes of "Raving and Drooling" (aka "Sheep") and "You Gotta Be Crazy" (aka "Dogs"). Also featured is "Blues," a generic number from a Paris date in 1970, and an exceptional live take of "Great Gig in the Sky" (Hollywood Bowl, 9/72).

Disc four picks up around the Animals period, and follows through to 1990 Knebworth festival. The disc begins with a full length live version of "Echoes" from '75, followed by the 8-track version of "Pigs on the Wing," which included a nice guitar solo and second verse after the album version faded. A demo version of "Comfortably Numb" is here, as well as the non-LP single "When the Tigers Broke Free." Then the disc moves into extensive outtakes from the movie The Wall, tracks that were not included on the album or significantly altered: "Mother," "What Shall We Do Now," "Bring the Boys Back Home," and "Outside the Wall." If you've been looking for "The Hero's Return" (B-side to 12" of "Not Now John"), it's here as well. There are two live takes from the '87 tour: "Run Like Hell" and "On the Turning Away." Disc four closes with, in this writer's opinion, the only disappointing track of the set - a live take of "Money" from Knebworth, sounding overly commercial with "ooh-ooh-ooh" backup singers that would sound more appropriate with (insert name of commercial pop-singer here).

Overall, though, this one worthwhile set. The odd track with substandard sound quality is more than balanced by the selection of outstanding rare live and studio material. This is everything that the 25th anniversary set should have been.