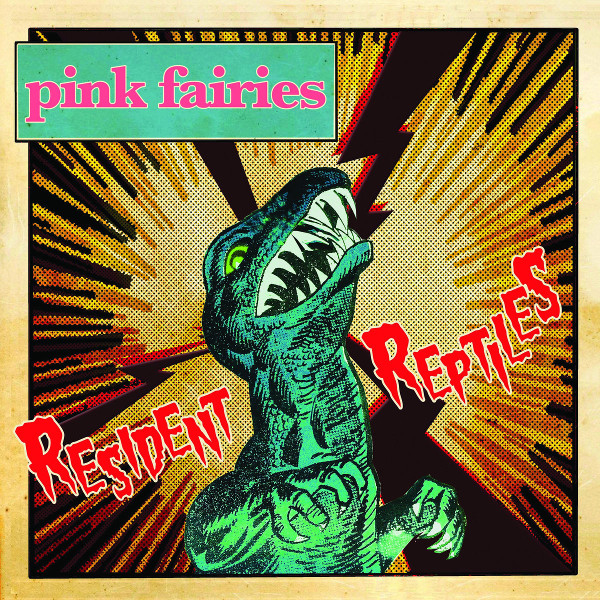 The band Pink Fairies may not be especially well known for their music, occupying a spot in history due to their connections to other bands with higher profiles: Hawkwind, Motörhead, The Pretty Things, and so on. Pink Fairies were steadfastly non-commercial and embraced the early-70s underground with their punkish attitude and raucous music. So what to make of a new release by this crew? Resident Reptiles features Alan Davey (bass, vocals), Lucas Fox (drums, vocals), and Paul Rudolph (guitar, vocals) ripping through eight rocking tracks and having a lot of fun. Producer Jürgen Engler contributes additional guitar, and engineer Chris Leitz plays Mellotron on one track. There is nothing complicated or sophisticated here, just classic 70s rock of the proto-punk variety, with lyrics ranging from political to rock-rebel themes (“You’re old enough to know better, but much too young to care...”). Rudolph was one of the band’s founders back in 1970 or so, Davey was in Hawkwind for many years starting in the mid-80s, and Fox was the original drummer in Motörhead, and together they wrote all but one of the songs here. The other tune was penned by Larry Wallis, a Fairies alum from the 70s who also played in Motörhead. Far from sounding like a group of has-beens trying to cash in on some kind of nostalgia, the Fairies sound vibrant, energetic, and pissed-off. Resident Reptiles works just fine as an introduction to this band, though I can’t say how it compares to their early material. This is rock and roll, pure and simple.