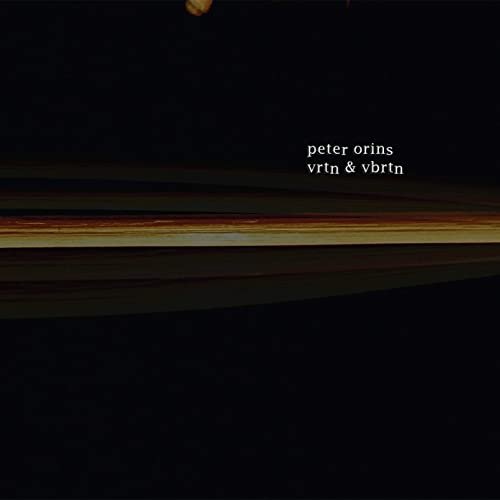 Orins is a drummer with his hands in dozens of different projects, both studio and live. We’ve covered many of his releases with TOC (Ternoy-Orins-Cruz), Kaze (with Satoko Fujii and others), WEI3, ADOCT, Satoko Fujii’s Orchestra, and many more, but for his solo projects he reserves his greatest level of creativity, not merely improvisations, but well-planned journeys into the mysterious and unknown. A couple years ago he released Happened by Accident, a solo album in the strictest sense, and only his second, a full six years on from his first, Empty Orchestras. Well, what does a musician do when unable to play live for nearly a year and a half due to a pandemic? Record another solo album, of course. Vrtn & Vbrtn (don’t ask about the cryptic titles, this writer has no idea) consists of two long-form pieces that pretty much pick up where the previous album left off, offering a further expansion of similarly inclined ideas. The first piece “Vrtn” is a purely explorative piece, where he uses the drums as a resonator for various wood, glass and metal objects, along with various moving loops and raw electronics, that open up a world of unexpected accidents and sonic interactions. No, this is not a 31-minute drum solo in any conventional sense, but a dreamy expedition into the hinterlands of sonic vibrations, textures, and mysterious microscopic sounds. The listener may find themselves drifting along in some curious stirring maelstrom with little or no melodic reference points, like cloudbursts on a distant horizon brought infinitely close to the listening experience. “Vbrtn” is a full ten minutes shorter, and involves a thin wooden stick between a cymbal and a floor tom, multiplied three times, the result being very long drones in extremely low registers, occasionally reminding me of parts of Nick Mason’s “Grand Vizier’s Garden Party” without the flute or Mellotron. One can easily feel themselves dropping into an infinite current of sounds as the piece proceeds along its path.