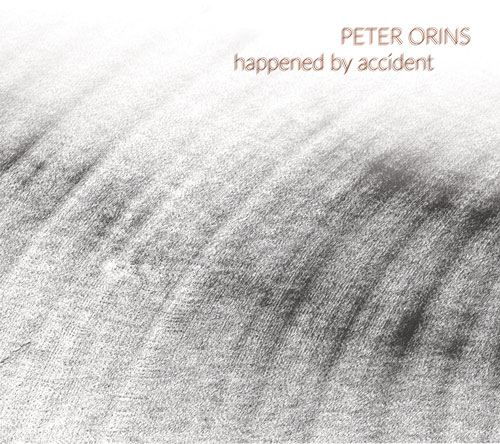 If one goes to the ‘discogs.com’ website and searches for Peter Orins, they will find that it simply says ‘drummer,’ though that’s certainly an oversimplification of the many different things Mr. Orins does. He is a member of Satoko Fujii’s Orchestra Berlin, Kaze, TOC (Ternoy, Orins & Cruz), Stefan Orins Trio, Flu(o) Circum Grand Orchestra, Garbowski-Cruz Quartet, WEI3, and many others, and functions as a drummer, percussionist, composer, and a creative force wherever he is heard. Happened by Accident is only his second solo album (half a dozen years on), but this one is done purely solo, only using a drum set and miscellaneous percussion, but don’t think for a minute that this is just a collection of drum solos; in fact straight rhythms are about the furthest thing from what we have here. As an improviser, his interests lie in the textures of sound possible from the wider range of percussive instrumemts, and how in combination they are able to create powerful compositions that transcend the standard forms. The first six tracks comprise “Happened by Accident” in six parts, focusing on the harmonics and microscopic acoustic interactons of all of the instruments involved, the noises made by drum skins, metal, wood, and bowls when struck, rubbed, bowed, and other acoustic interactions. As a drummer I’ve always been interested in the sounds that percussion can make when played the ‘wrong’ way, or at least non-conventional ways, and in these first six tracks, Orins has made that his standard, eschewing conventional drumming in favor of sounds unexplored and accidental. Sometimes loud (especially the orchestral bass drum), other times quite faint and ambient, offering curious abstractions of sound that collected together make for some truly interesting listening, like a dreamy walk through the forest at night, with real sounds combining with those of the imagination. The final track on the disc is “Having Never Written a Note for Percussion,” written by James Tenney in 1971, and focuses on the shifting frequencies, timbres, resonances, and more subtle nuances of an extended roll on cymbal for an extended duration, almost twelve minutes in fact, growing slowly from silence to full-on volume, and then fading back into darkness. Unlike Orins’ previous solo album, this one seems to contain no electronics, only pure acoustic percussives, and numerous attentive listens will slowly reveal the beauty of what Orins has created.