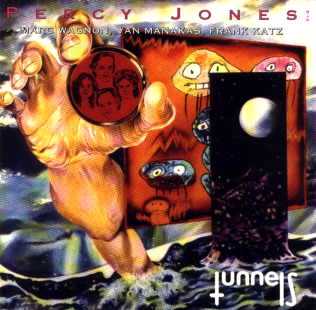 Jones, who is probably best known for his impeccable and highly energized fretless bass work in Brand X, brings that pedigree to this, his newest project band. Also featured in the lineup are drummer Frank Katz, fresh from the latest edition of Brand X, Marc Wagnon of Doctor Nerve fame on midi-vibes controller, and guitarist Van Manakas. As one might expect, the sound here, unlike Jones' previous two overprogrammed solo sorties, is a full blooded fusion of rock, jazz and funk; at the bottom end the comparisons with Livestock period Brand X are unmistakable, since, after all, it was Jones' unique bass spin that gave that band its distinction. The top end of Tunnels is quite different, though: Manakas' fluid driving guitar leads sear smoothly through whatever backdrop Wagnon creates with his versatile setup, which covers most traditional keyboard sounds, vibes, other percussives, even a 'Mellotron' sound. Manakas intentionally abstains from the hard-edged guitar indulgence of Jones' former colleague Goodsall, instead favoring a more supportive role within the group that better showcases the more complex interplay between the instruments. For the most part the recipe works well, but occasionally the listener might get lost in the cauldron.