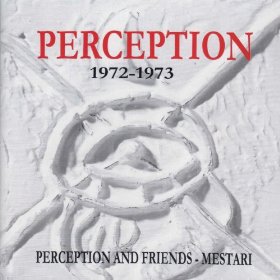 One of the members of the first graduating class of Magma, woodwind player Yochk’o (Jeff) Seffer joined up with three other like-minded players for a three-album free-jazz run in the early 1970s. The quartet, which included Didier Levallet on bass, drummer Jean-My Truong, and Siegfried Kessler covering piano, clavinet and flute, released their eponymous debut LP on the Futura label in 1971 (since reissued on CD by Mellow in 2001). The package at hand reissues Perception’s second and third LPs, Perception and Friends and Mestari, from ’72 and ’73 respectively, with almost an album’s worth of bonus tracks. What’s notable about Perception and Friends is the absence of Kessler on all but one of the five cuts, replaced on the others by Manuel Villaroel on piano. There are also a number of additional players sitting in, track depending (the Friends), including Magma alums Luis Toesca (trumpet) and Teddy Lasry (soprano sax & clarinet), plus Daniel Brulé on trombone, and three of the cuts feature multiple cello players, which all taken give this album a very different feel than its predecessor, or Mestari that followed. Like all free-jazz, things get a little chaotic at times, especially when there are that many cooks in the kitchen, but most of the music here is composed, just offering plenty of windows for improvisation. With Mestari, Perception went back to the core quartet (with Kessler returning on strictly electric piano, and penning one of the album’s finest cuts, opener “Chott Djerid”). In fact the album proper contains only three long tunes, the others written by Seffer and Levallet. Still jazz, still very free, but with a few less musicians in the mix going off in every direction, Mestari overall seems a lot more satisfying. Also of note is the bonus track “Waiting For Moby Dick,” featuring a reformed Perception in August ’79 featuring only Levallet and Seffer. By the end of ’73 Seffer and Truong would join up with bassist Joel Dugrenot, keyboardist Francois Cahen and singer Mauricia Platon for the first edition of Zao, and the rest is history. There’s a lot of excellence to be heard here in these two brilliant slabs of French jazz.