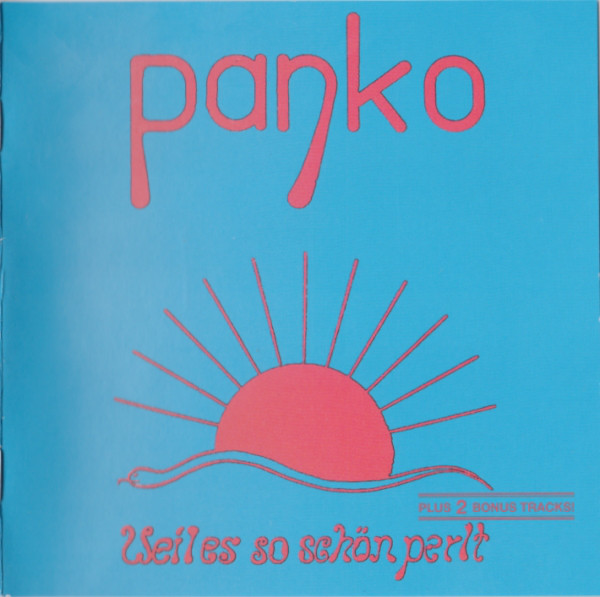 I suppose as rarities go, this one qualifies as almost-lost. Panko, or Panko Musik as they were often known, existed from about 1968 until 1972, named after the Pankow area of Berlin where they came from, the “w” at the end was left off intentionally as the bands trademark, and they should not be confused with the band Pankow from east Berlin in the early 80s – by that time this Panko was long gone and almost forgotten. They never released any recordings during their existence, but they did play a lot of gigs during their time, not only in Berlin and Germany, but even in Denmark, Belgium, and Holland. The band recorded many of their own gigs and rehearsals, and the recordings at hand were made from a gig that took place in June 1971, originally released as a cassette in 1983 by the band’s drummer Reinhard Stey, a full eleven years after the band broke up. Other members included guitarist Helmut Sucker, Frank Graeber, who played flute, alto sax, and sang the German lyrics, Peter Paszek, who played flute, percussion, and sang their English lyrics (he had lived in England previously), and bassist Peter Gentsch. Other members came and went over the years, but these five were the mainstays who were on this recording, later titled Weil Es So Schön Perlt. It’s important to keep in mind that these recordings were never intended to be released, and are essentially bootleg quality, but with that said the sound is on the better end of that scale and completely acceptable. There are six cuts from the original tapes, plus two additional bonus tracks. Their style is a heavy bluesy rock with jazzy touches, raw vocals, although the presence of woodwinds makes their sound somewhat special (sometimes both sax and flute), and the longer pieces like opener “Erröfnung” mostly explore the band’s instrumental side. The spoken words parts on “Teppich (Hutzel Perpa)” are strangely reminiscent of the early Doors, the vocals which Paszek handles commendably. “Baby, Please Don’t Go” is not a cover of the better known 60s song, but a Panko original, as all the songs here are, only using the title as a springboard for some wild vocal improvisations. “Kasbians Abenteuer” is the longest cut, at close to 13 minutes, which gives the group plenty of room to stretch out in all directions, including some parts for dual flutes, with some vocal sections hinting at early Mothers of Invention. The two bonus tracks are eleven-plus minutes each, and show more of the band’s free-wheeling loosely composed improvisation style. Overall, it’s good to have these recordings available, and one can only lament that the band never got a chance to lay down tracks in a proper studio environment in their time.