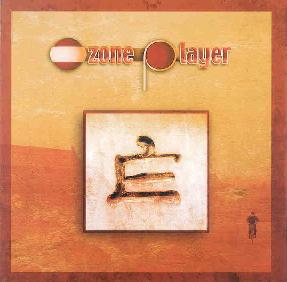 Ozone Player is an electronic project created by Otso Pakarinen, but a real oddball one that doesn’t fit into any of the schools of electronic music. It’s not heavily sequenced, groove-based dance music, and it’s not ambient chill-out/space-out stuff. It’s also a fairly scattered affair, with tracks varying quite widely in style. My favorite of OP’s modes is the most experimental, utilizing many sounds with unconventional tunings (gamelan-like on “Light Music for Small Masses” and what sounds like saws and metal plates on “Re-Ollism”). These parts remind me of Wendy Carlos’s Sonic Seasonings or even White Noise, and show real originality and a good ear for tone colors. My least favorite of OP’s modes is a kind of goofy techno-polka that, while ridiculously catchy, just ends up annoying me. In between (stylistically at least) there are tracks like the opener (“My Name Is Bond… Jeeves Bond”) that sounds more like Synergy than anything else, like a lost track from Chords with beefed up percussion. “The Runner” features a bit of guitar playing from guest Jouni Halmari, a nice contrast to the keyboards and quirky rhythms, for a rock-oriented feel. There you have it. Ozone Player is a deliberately mixed bag, and if you don’t like what you hear, just wait a few minutes – it’ll sound completely different.

Negative Trip - Parasite Psychotic – Crashing beats, distorted sounds, sampled voices: this band from the town of Wädenswil, near Zürich, is definitely plying the decades-old genre of industrial electronic music. But they have the good...  (2010) » Read more

This Music Is Deep, Very Deep