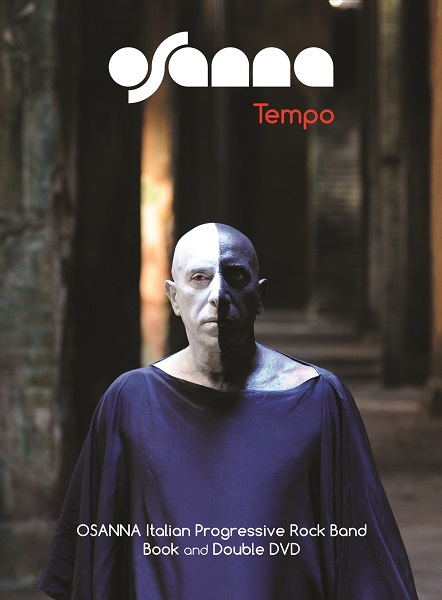 Tempo is a double DVD housed in a beautiful book with lots of photos from Italian theatrical proggers Osanna. Disc One is a concert recorded in Naples at the Trianon Theater on October 24, 2012. This is a career spanning concert featuring songs from their catalog along with guest musicians David Jackson (on “Theme One”), Gianni Leone (on “Introduzione”), and Tito Schipa Jr. (“Per la Strada”). Other guests included Sophya Baccini, Giampero Ingrassia, Elio Eco, Maurizio Capone, and Antonella Morea. Since the massive Prog Exhibition 40 Anni di Musica Immaginifica was recorded about the same time, all of the songs from that concert are here as well as more for the entire performance. Extras on Disc One include a music video of “Rosso Rock” with Lino Vairetti in black robes with the left side of this head black and the right side white walking/drifting through some ruins. Images are meant to make him transparent and then by the end of the song is whole head is grey with red makeup smeared all over. This imagery recalled to me the Star Trek episode from January 10, 1969 with Frank Gorshin “Let That Be Your Last Battlefield.” There were two aliens Bele and Lokai and what lingers in my mind after all these years is that Bele believes his black and white coloration to be superior to Lokai's — "I am black on the right side" ... "Lokai is white on the right side." So in this video, Lino must be a member of Lokai’s race. Sorry for the tangent. The other extra on the disc is a backstage interview. Unfortunately most is in Italian without any subtitles. The only exception is when David Jackson is interviewed and of course he speaks English. But this is not much of an issue as the interviews are edited with excerpts from the sound check and actual concert so it tends to hold your interest even if you don’t speak Italian.

Disc Two, titled Osanna Story, is a collection of 20 historical video clips from 1971 – 2009 including extracts from TV shoes and live concerts. This alone is worth the price of this double DVD set. It is fascinating to see that band evolve over this 40 year time period. The earliest videos are multiple versions of “L’Uomo” recorded on various TV shows. And it is amusing to watch the Emcee struggle against laughing at the band all made up in greasepaint and robes and to talk seriously about the music. And to make things even more awkward for the Emcee, the band stands there with extremely serious expressions. If I counted correctly, there are at least six different videos of “L’Uomo” with two in this century. Over time this song has taken on a more aggressive nature and I think is far superior to the original. Back in the day, they all had long hair and lots of facial hair. That in combination with the greasepaint made them freakish, especially compared the relatively conservative Emcees in coats and ties and the straight laced audience. This was quite a statement for the 70s. Today Lino is bald and his son Irvin is now part of Osanna. The band if anything has more stage presence and aggressiveness today than when it began and the makeup and costuming no longer seems out of place.

This is quite a documentary effort and belongs in the library of any prog rock aficionado.