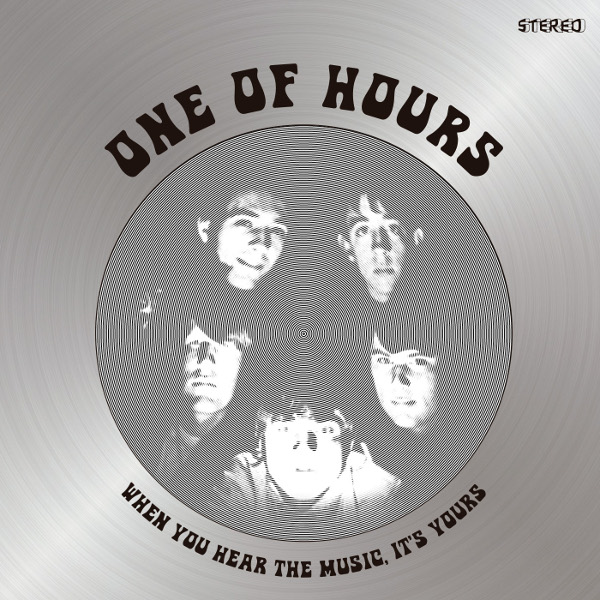 Winding the clock back to 1966 in Lexington, Kentucky, a group of friends at the University of Kentucky got together to form the garage-psych band One of Hours. They released their first 45, “Trifolia” / “It’s Best,” in 1966. After adding Bob Willcutt on guitar, they released their second single, “Feel the Pain” / “Psychedelic Illustion,” in 1967. They then began work on their full length album, When You Hear the Music, It’s Yours. The band changed their name to Dandelion Wine. They sent the master tape to Liberty Records, with the promise of a record deal for a 1968 release. Then things turned south, rumors of a warehouse fire, etc., regardless the tape was lost. Only a second generation quarter-inch copy remained. The band eventually broke up, and now 50 years later, Guerssen is issuing the album as a deluxe vinyl edition housed in a silver mirrored die-cut sleeve. One of Hours pushed the limits of music in the late 60s, using all kinds of studio tricks to create their psych freakout album, like backwards recording, prepared piano, singing through a comb, etc. On the song “C19X” their lead vocalist, who was studying Russian, found that he could say C19X backwards (sounding Russian), which they recorded backwards and played fowards to give it a trippy swooshing sound. They were one of the first studio bands to use this experimental technique. The resulting album is quite interesting. Be it the pseudo-cocktail lounge/Mothers of Invention inspired title track; the crazed kazoo on “Mother Said;” the freaky tremolo love ballad “Love Is Real;” “Two Heads for 35 Cents” with the background ads and the similarity to Cream’s “I Feel Free;” to the closing track, “A Way to Leave at Last,” with the sounds of surf, Apollo countdown, and launch, this is one excellent snapshot in time of the experimental 60s.

Related artist(s): One of Hours