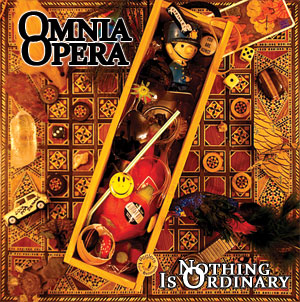 It’s been a long time – fifteen years I reckon, since the band's second CD release Red Shift, which itself was a full four years after their first, following two cassette releases going all the way back to 1986. This is a band that takes their time to get things right, and the album at hand – a sprawling and luxurious two-disc set of electrified psychedelic space-rock, is evidence of this ethic. The band reformed in 2006 after a decade of dormancy, with three key members from the last edition of the band: Neil Spragg (d), Rob Lloyd (g) and Andy Jones (b, voc), joining new members Libby Vale (voc, effects) and Captain Bagley (k, voc). There has been plenty of growth and development over the interim years, making this new album far and away their best yet. While there are still strong reference points in their music from those who invented and refined the genre (Hawkwind, Gong, Ozrics), Omnia Opera has found its own unique voice within the now crowded field. For those who appreciate long tracks, Nothing Is Ordinary is heavensent, with many of the eighteen tracks linked together into lengthy suites that break the ten minute mark and often stretching out to the length of a full LP side. Swirling edgy guitars and powerful synths over a driving rhythm section is the order of the day, with often-distorted voices, space whispers and psychedelic effects applied generously over it all. While the recent 2-on-1 reissue of the self-titled and Red Shift on Esoteric may be tempting, for those previously unfamiliar with Omnia Opera, Nothing Is Ordinary is a much better place to start your experience.