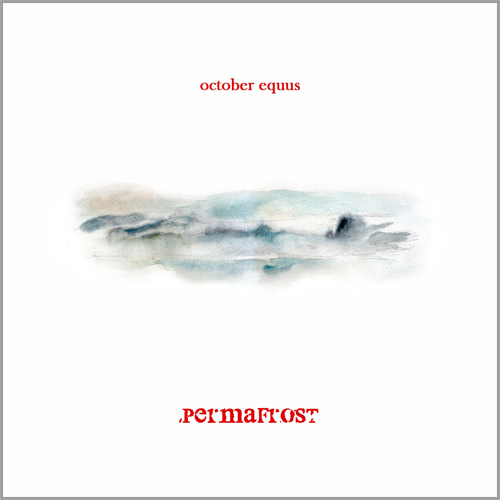 In 1845 Captain Sir John Franklin led an ill-fated expedition to find the Northwest Passage. After a few early fatalities, the two ships became icebound in the Victoria Strait near King William Island in the Canadian Arctic and were lost. The only evidence of the expedition are the frozen mummified remains of three crewmen buried in the permafrost on Beechey Island. These crewmen probably died of pneumonia and/or tuberculosis, hastened by lead poisoning from the badly soldered cans in the ships' food stores. Franklin's lost expedition has been the subject of many songs, poems, short stories, novels, and TV documentaries. October Equus' Permafrost is the latest. Unlike Simon Fisher Turner's soundtrack to The Great White Silence about Captain Robert F. Scott's expedition to the South Pole, Permafrost is not a sound poem. Instead Permafrost consists of eight tracks of excellent progressive jazz averaging about five minutes each. I am only familiar with their debut release from 2005, and I still detect some references to Le Orme, especially in the keyboard passages. Overall, the music is dark with another touchstone being the French band Shub Niggurath. However, to me, the music is not particularly cold or frozen, it demands your attention. And it is more like one entire composition lasting 40 minutes with eight movements instead of separate tracks. Today the band consists of Ángel Ontalva (guitar), Victor Rodriguez (keyboards), Amanda Pazos Cosse (bass), and Vasco Trilla (drums). All are accomplished musicians whose talents compliment each other by weaving various various themes, rhythms, and lines into one seamless composition. If you long for intelligent music, then Permafrost is for you.