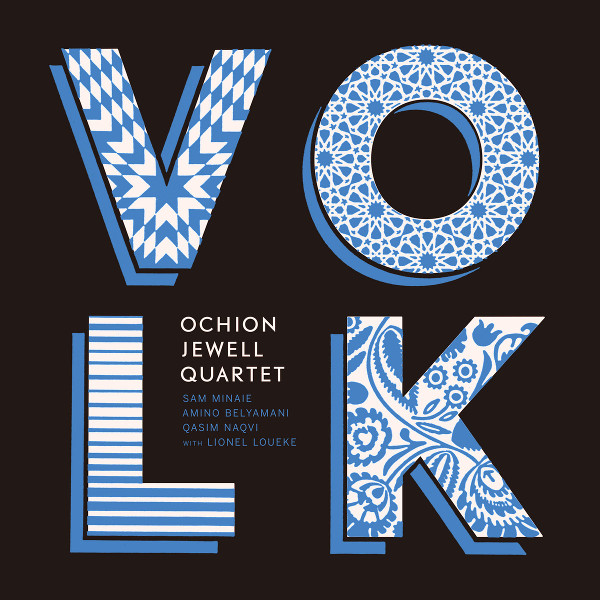 Saxophonist Ochion Jewell’s newest quartet recording is a fascinating, wide-ranging affair that encompasses source material as diverse as folk music from Finland, Ireland, Ukraine, and Appalachia, blues from North Africa, and more. The group itself is nearly as diverse: Jewell himself hails from Kentucky, pianist Amino Belyamani is Moroccan, bassist Sam Minaie is Persian-American, and drummer Qasim Naqvi is Pakistani-American; two tracks feature appearances by West African guitarist Lionel Loueke. While all are outstanding musicians, Volk is about group cohesion, communication, and interplay. No doubt they could play the heck out of jazz standards, but their scope isn’t limited by that kind of tradition. The Finnish song, “Kun Mun Kultani Tulisi,” is one I’d heard before by the group Loituma. Here it becomes a moody epic, starting wistfully with a sad saxophone and what sounds like prepared piano, building slowly until the piano is playing insistent, dissonant chords. After an interlude similar to the opening, the second half of the track wanders into heavily improvised, very free playing from the ensemble. The Irish tune “Give Us a Drink of Water” is given a very interesting treatment, with the melody on sax and piano in unison, punctuated by dissonant stops on the bass and lower register of the piano. Later there are some very interesting advanced harmonizations. Other pieces are given similarly creative interpretations. When Loueke’s plaintive, bluesy guitar comes in, backed by mournful arco bass, we get a new take on the much-recognized similarity of North African music with American blues. When Naqvi’s rhythmic part comes in, the group settles into an easy groove that honors both traditions. The following track is “Gnawa Blues,” which features a stunning, unpredictable arrangement with hints of Béla Bartók in its rhythmic breaks. The set finishes off with a pair of American tunes, the last of which, “Black Is the Colour (of My True Love’s Hair),” is given a solo treatment for Jewell’s sax. Volk is a bold statement of entry for a major new artist in jazz, sure to garner accolades far and wide if it can reach the right ears.

Hugh Hopper Band - Alive! – After his glory days with Soft Machine, Hugh Hopper went through some lean times (musically at least), until the mid to late 80s, when he hooked up with a crew of Dutch musicians for a number of tours...  (1999) » Read more