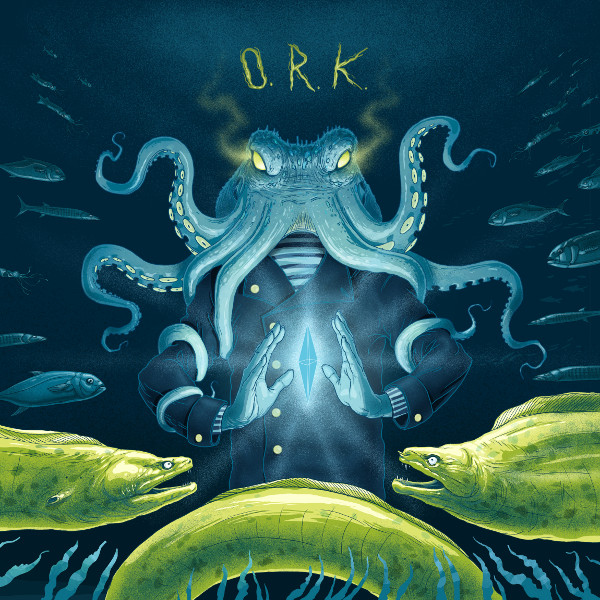 The first O.R.k. album was a pleasant surprise, presenting an imaginative take on the confluence of heavy rock with atmospheric production and strong vocals. Soul of an Octopus gives us nine more tracks of the same basic style, and while it is perhaps a little less immediately appealing, it is a no less rewarding release. The notable changes from Inflamed Rides are the increased use of acoustic guitar and electronic percussion. Certainly Carmelo Pipitone played acoustic guitar on the debut, but it seems more prominent now, with tunes like “Collapsing Hopes” featuring acoustic and slide to start with, though of course the heavy electric parts are bound to arrive before long. Pat Mastelotto is no stranger to electronic percussion, and his inclusion of it here is well within his style, though he avoided it for the previous O.R.k. album. These electronic elements do not overpower the rock element of the drumming, only serve as coloration at times. To a great extent, the sound is dominated by the vocals of Lorenzo Esposito Fornaseri, which are strong and capable of great range — and his lead parts are augmented by many backing parts, both harmonizing and offering counterpoint and commentary. The second defining factor comes from Pipitone’s guitars, often with three or more parts worked expertly together, providing variations of tone as well as enriching the harmonies. You’ll hear one or two acoustic parts with picked or strummed parts, a bluesy slide, and several distorted electrics with riffs and chords. One of the really nice elements of the band’s sound comes from Colin Edwin’s favoring fretless bass, which is not often heard in such heavy circumstances, but adds a lot of interest to the music. Add in some supportive keyboard parts (from Fornaseri), and you’ve got a lot going on. Fornaseri’s production manages to make it all sound real and natural, full but not overdone, with each part fitting into its own sonic space. Soul of an Octopus is another great release from this great band, and should find a home in the playlists of fans of Porcupine Tree and other progressive music that is heavy but not in the realm of progressive metal.