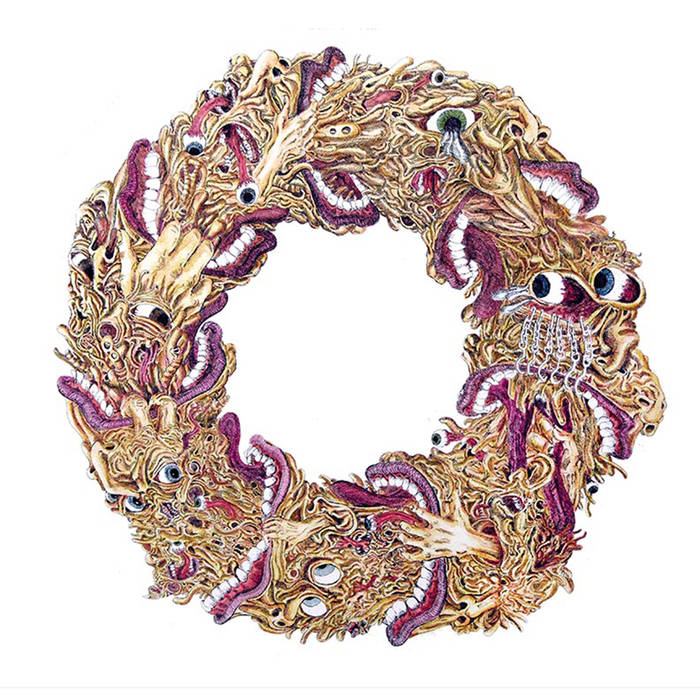 There is nothing conventional about this second release by French four-piece Nooumena; throughout, it breaks all the barriers and really follows few guideposts of any previously mapped musical genres. One might call it “avant-garde art damage” — it’s even too bizarre to call R.I.O. but that might be the nearest point of reference. Blasts of unconventional sounds and barely controlled chaos over a sinister heavy rock beat occasionally host passages for twisted vocals (in both French and English, with lyrics in the booklet, though it doesn’t matter, as they are often heavily effected and difficult to even understand). The band makes a lot of noise for just four guys. Drummer Pierre Blin doubles on synths and is the band’s recording engineer, while guitarist Thibault Geay penned the lyrics and also sings them (and he’s also responsible for the fantastic artwork on the cover and throughout the booklet. Maxime Métais plays guitar and doubles on sax, and bassist Simon Toralba rounds out the bottom end. This is hard and edgy, full of intense blasts of blistering guitar noise, weird electronic sounds flank all kinds of sampled voices, sirens, and other mysterious clang. A violinist guests on the opening track as well. There are seven tracks listed, though unless one listens close and keeps an eye on the counter, the transitions might easily be missed. As soon as one moment is in the past the next comes down like a hammer or an explosion of shrapnel. Track 5, “Concealed,” is especially powerful and interesting, the interchange between heavy guitar chords and powerful drums and bass that starts about one minute into the track, giving way to dual lead guitars and a general Crimsoid chaotic din for the remainder to its five-minute conclusion might be the album’s high point. But there’s a lot like that to explore, and this clearly seems like the kind of album that will still be revealing its secrets on the hundredth listen. Not for the faint of heart, these are challenging sounds for intrepid explorers.

Lunatic Soul video for "The Fear Within"