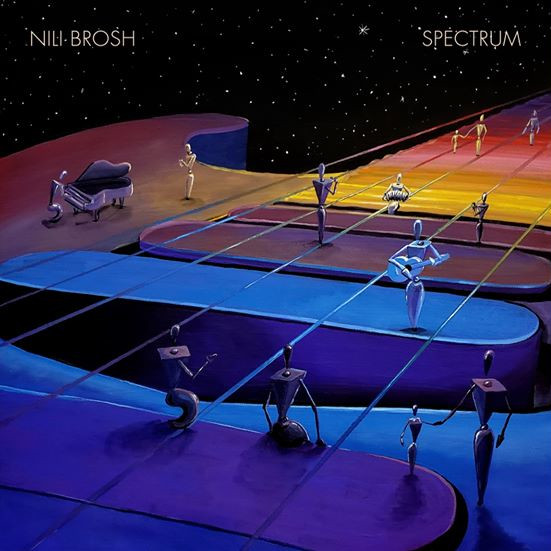 Guitar hotshot Nili Brosh starts out her third solo album with five tracks centered around acoustic guitar and finishes with five on electric. “Cartagena” is a lovely Spanish-inflected piece with bass and percussion accompaniment. It’s a bit more tonally adventurous than (say) Ottmar Liebert, but in a similar idiom. “Andalusian Fantasy” is in the same vein, with hints of Al DiMeola, though again Brosh distinguishes herself with fluid runs (rather than the fast picking DiMeola is known for) and solos that play with tonality in unexpected ways. “Circus Wedding” and “Rachel in Paris” move north from Spain to France, adding accordion into the mix for tunes that could come off as corny and clichéd but work wonderfully, hearkening back to Django Reinhardt. “Rachel” also features violin and piano, then introduces some synthesizer arpeggios in its second half, turning its rhythmic invention on its side and beginning the transition to the more electric music that follows. After a tasty melodic ballad with clean-toned electric, Brosh starts to pull out the stops and gives us a set of energetic workouts where her guitar is backed by programmed drums and synthesizers courtesy of co-producer Alex Argento. Brosh’s playing takes on elements of Jeff Beck, Steve Vai, and other flashy modern ax-wielders, though she doesn’t sound too derivative. I miss the real drums, percussion, and bass of the album’s first half, and as much as I enjoy the electric pieces while they’re playing, once they’re over, I forget them and remember the more interesting tracks from the first half of the album. It’s possible that the later pieces would be more memorable had they been done with real drums, a bassist, and a keyboard player, but it does seem that they feature less harmonic variety and more predictable melodies. In a world full of talented guitarists, Nili Brosh can hold her own, and if she could bring the same spirit of invention to all of her tracks, she would be a real noteworthy player.

Motorpsycho - Little Lucid Moments – This Norwegian trio has been releasing music for nearly two decades now. This writer was a relative latecomer to their work, first introduced via their Phanerothyme and Let Them Eat Cake albums...  (2008) » Read more