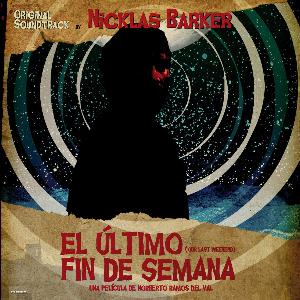 Most will know Barker as a founding member and longtime guitarist of Anekdoten. On El Último Fin de Semana (Our last Weekend), he was tapped to produce the soundtrack music for the horror film of the same name by Spanish director Norberto Ramos del Val. The soundtrack consists of seventeen short cinematic vignettes, many strung together into longer seemingly-continuous pieces. This is entirely instrumental with the exception of some occasional bits of dialog from the film, and follows the classic dark over-the-top style that Goblin pioneered with so many Argento films back in the 70s and 80s, yet Barker finds a novel and fresh way to present a similar vibe. One won't hear a lot of recurring themes and variations throughout the soundtrack; instead this 35-minute disc is packed with tension, release, power, atmospherics and impact. Surprisingly, Barker plays no guitar – in fact there is no guitar to be found on this soundtrack anywhere; instead he provides all the compositions, production, synths, bass, Mellotron (yes... lots of Mellotron), Theremin, and gongs. Joining him is Anekdoten bandmate Peter Nordins on drums, Martha Barker on cello, and Karolina Bergström on violin. And did I mention the Mellotron? For listeners who love that instrument, El Último Fin de Semana is a veritable feast of Mellotron sounds, almost without equal. All taken, this is an outstanding collection of short symphonic pieces that even the most discriminating listeners should enjoy.