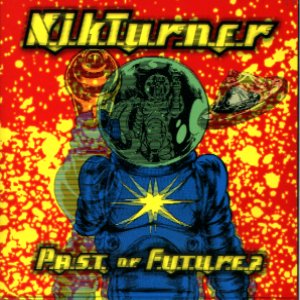 Hawkwind fans listen up! This is the live document from last summer’s “Space Ritual” tour. Saxophonist, vocalist and founding Hawkwind member Turner is joined by other Hawk-alumni Simon House (violin), Del Dettmar (one-string double-bladed axe synthesizer), and Alan Powell (drums), as well as the entire Pressurehed lineup. Twelve of the fourteen tracks are from the Great American Music Hall (San Francisco) on 8/6/95 — surprising because I was at that show and the sound was unbearable, so much so that I split well before the encore. Via the magic of remixing, the show now sounds infinitely better than I remember it. Many classics from the early Hawkwind dossier are included: “Lord of the Hornets,” “You Shouldn’t Do That,” “Ten Seconds to Forever,” “Spiral Galaxy 28948,” and several others — and of course what Hawkwind show would be complete without “Silver Machine”? Also, dig the lenticular grid on the jewel box cover: as you turn the CD, Nik draws his plasma gun and the spaceship flies away.