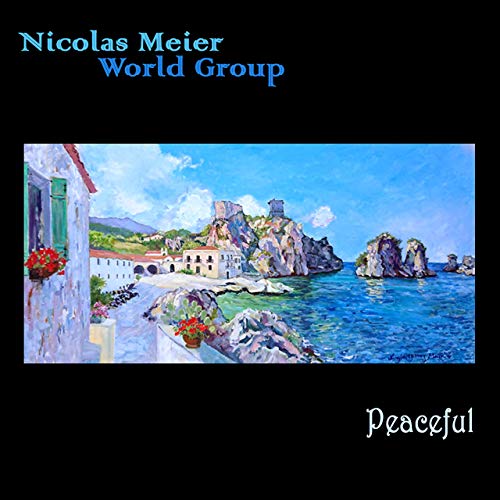 Nicolas Meier is an immensely capable Swiss-born and British-based guitarist and composer who works in many styles in quartets, trios, duos, solo, as well as other configurations, and has appeared with Jeff Beck on both studio albums and live. In general, his versatility is amazing and never fails to surprise, though he is generally considered to be a jazz guitarist, and here on Peaceful, he has taken that a step further into the realm of world jazz. The album’s nine instrumental tracks take the listener on a pan-Mediterranean cruise of sorts, stopping at various points of interest, absorbing the local flavors. Produced with his old friend Pete Oxley, with whom Meier has worked many times before, the quartet includes Meier on nylon-string fretted and fretless guitars, and twelve-string, violinist Richard Jones, bassist Kevin Glasgow, and percussionist Demi Garcia. Meier, with his jazzy tendencies and Jones in the lineup might invite comparisons to Django Rinehart and Stéphane Grapelli at certain odd moments, but what they are doing both in the compositions (all by Meier) and arrangements are uniquely their own. Very impressive is Meier’s fretless work on tracks like “Caravan of Anatolia” that gives his playing a unique sound, much like an oud, that drives its openly Turkish flavor. The fretless is used again on the beautifully melodic “Princes’ Islands” in a more relaxed and mellow approach, with the violin taking its turn in the solo spot as well. The vivid opener “Besiktas Cafe” is a gentle but upbeat piece that truly invites the listener into the scene where the whole group is playing at your table. “City of the Three Rivers” is a flamenco-flavored piece that covers plenty of territory across its seven-and-a-half minute duration, shifting colors and hues and moods as it proceeds onwards. “The Island” that follows it again makes mysterious and powerful melodic colors again with the tasteful use of fretless. The upbeat fountain of rhythmic and tasteful melodic passion works throughout the seven minute “Manzanita Samba” offering everyone in the group to show their best. All taken, Peaceful is a spirited and joyful travelog that delivers on many levels.

Koniec - Silenci en Bla – Koniec is a Spanish instrumental four-piece of drums, keys, bass and saxes, whose music could best be described as free-jazz-rock, along the same axis as folks like Curlew, Doctor Nerve, and others....  (1994) » Read more