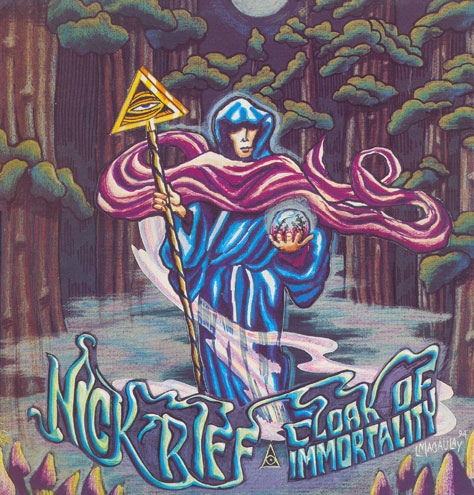 Cleveland's Nick Riff should be a familiar name to followers of the neo- psychedelic scene, from his original band The Attitude's 1986 five-song EP, to his earlier releases (Heart of Oblivion - 1989, and Freak Element - 1992) on Delerium. For this release, the vocalist / guitarist / keyboardist is joined by bassist Steve Taylor and Thom Marianetti on drums, plus additional guests. Riff's music is an accessible blend of 60s style rock – especially in the vocal passages, and modern new-wave psychedelics – in fact there are a multitude of influences at work here, and Riff has assimilated them quite well – one would be hard pressed to say who Nick Riff sounds like, elements of REM, Gong, and Psychedelic Furs mix freely with mid-60s stuff like The Seeds, The Amboy Dukes, and the Strawberry Alarm Clock. For some, this may not be overtly 'progressive' enough, but fans of energetic space rock should find plenty here to enjoy. Tracks like "Temple of Dreams" and "Zen Stray" are in fact very good on many levels.