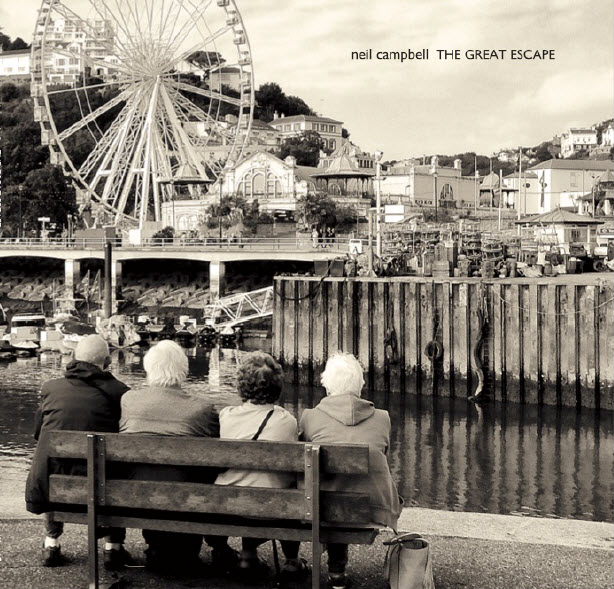 The music of Liverpool-based multi-instrumentalist and composer Neil Campbell is certainly unpredictable, and takes many forms, whether solo or with one of his bands, The Neil Campbell Collective, Bulbs, or After the Flood. The music on his latest, The Great Escape, is at its essence solo acoustic guitar based, supplemented with some additional instrumentation like electric guitar, electric bass, and keyboards (the former all played by Campbell) strings, and light drums (the latter played by either Victor Nordberg or co-producer and engineer Jon Lawton). Released in mid-December 2021, the music here is the product of pandemic times, yet as a 100% instrumental endeavor, it is filled with emotion, warmth, hope and delicate beauty. The album’s twelve tracks are informed by elements of jazz, blues, folk, classical, ethnic and world music, and much more, carefully straddling the fences so as to not fall to deep into any one of those, though one might suspect the most fitting tag would be that of jazz, at least on the technique level. From track to track, every new corner is full of delightful surprises that will make the listener sit up and take notice. Tracks like “Spanish Feat” and “September” embrace a strong and distinctive Spanish / Mediterranean vibe, while opener “Symzonia” and “Jazz Hands” find themselves in a strong, but gentle and easygoing jazz idiom, not unlike something Pat Metheny might have come up with early in his career. “Solar Monarch” paints beautiful melodic lines over a bluesy groove, while “Another Estuary” breathes a powerful air of melodic mystery while gracefully draped in string synths. “Don and Walt’s Hawaiian Excursion” grafts an unforgettable melody over a catchy rhythm. Still other tunes seem to be stunningly original insomuch as to eschew any easy categorization, seemingly shifting influences and styles from one measure to the next. Through repeated listens the point will come when all twelve cuts will be intimately familiar, and at that point the listener will realize that The Great Escape is truly a modern gem of instrumental acoustic songcraft.