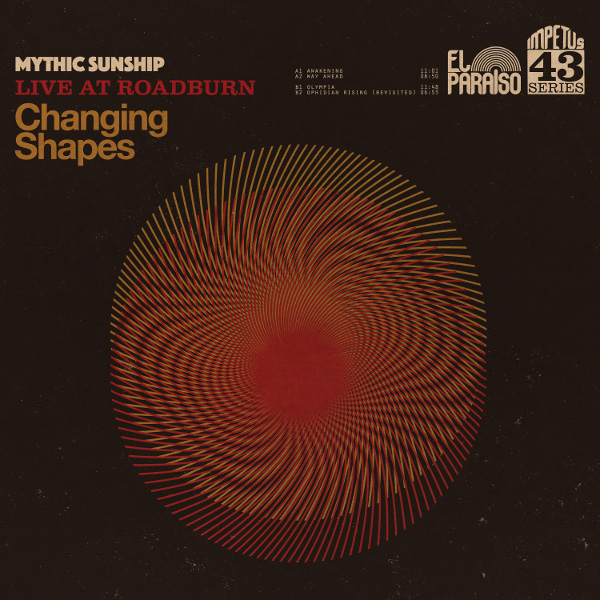 We last checked in with Mythic Sunship with their 2018 album Another Shape of Psychedelic Music, which was an appropriately titled landmark recording for the Danish five-piece band, and now their latest, Changing Shapes, presents those ideas at full power in a live setting, recorded at one of three sets they performed at the 2019 edition of the Roadburn festival. For the unfamiliar, their sound could best be described as an all-out instrumental jam-rock powerhouse with a strong free-jazz influence of John Coltrane and the like, all whipped up into a cosmic psychedelic frenzy. The band remains the same as on the previous recording, featuring guitarists Kasper Andersen and Emil Thorenfeldt, saxophonist Søren Skov, and the rhythm section of drummer Frederik Denning and bassist Rasmus “Cleaver” Christensen. There are five long tracks here, most clocking in between nine and twelve minutes, the opener “Awakening” being one of the longer cuts with plenty of room for everyone to stretch out and shine. The second and third cuts, “Elevation” and “Way Ahead” respectively, are live versions of a couple tunes from Another Shape, in fact they are the only pieces here that are live reworkings, the former being about five minutes shorter than its studio counterpart. “Olympia” is another new piece, building up slowly to a pounding intensity, both guitarists laying down howling leads with sax intertwining over that relentless groove, a piece that stretches out to nearly twelve minutes. Closing the set is “Ophidian Rising,” another new piece that reaches deep into a driving groove with beautiful wailing sax flying circles around the band. If the past is any indication, you’ll want to get a physical copy of this quickly (available on CD and LP limited to 500 copies) because most of their previous albums, even as recent as 2017, are long out of print.