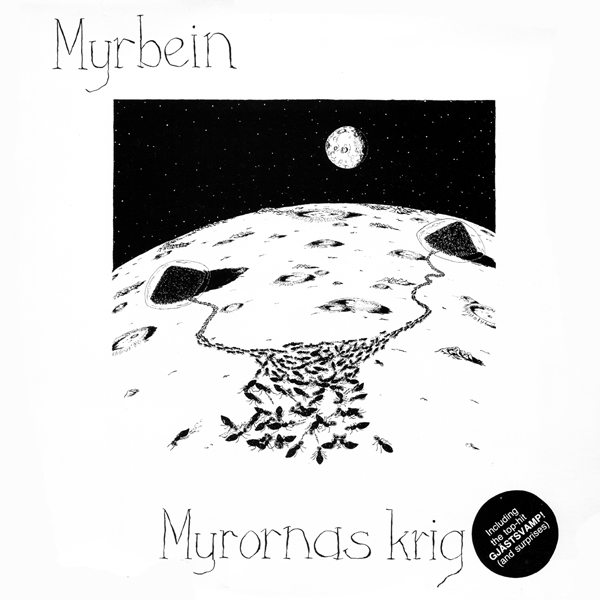 Myrbein's 1981 album Myrornas Krig is the latest re-release from the Swedish Ad Perpetuam Memoriam label, which also brought us Kultivator's Barndomens Stigar. Perhaps not surprisingly, the music sounds somewhat similar - relatively dark and heavy, with a dash of Canterbury influence. Myrbein's music is a bit more in the RIO vein, though; sort of like a 50/50 mix of Kultivator and Samla Mammas Manna. There is a mysterious, typically Scandinavian feel to the music, which features fuzz guitars accompanied by electric piano/organ, bass, drums, and an occasional sax or clarinet. The 12 songs are mostly in the 3-5 minute range, about half of them instrumental. The vocal sections tend to feature the silly, frenzied, and somewhat perverted renditions of folk themes that characterize much of Samla Mammas Manna's music. A few spots also reminded me of Etron Fou; a punk-inflected RIO style in the short song format. The instrumental sections, however, make up the better portion, in terms of both length and quality, of the album. The music is full of meter/time/feel changes, never dwelling on one theme or idea for very long, very much in the style of the Muffins. In fact, the Muffins may be the best pointer to the sound of Myrbein; quirky and complex arrangements which never stay in one place very long, and never leave the musical or lyrical humor far behind. The CD includes a bonus track - a pretty much note-for-note cover of "Larks' Tongues in Aspic Part II," recorded by the band in 1993. Hopefully they recorded some other new material as well; Myrornas Krig is an excellent album that should appeal to fans of any of the aforementioned bands.