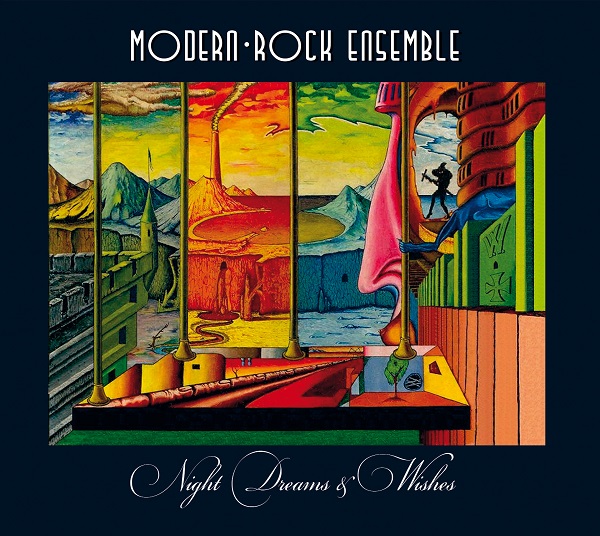 Sometimes I think the main drawback of the CD medium is its 80 minute capacity, leading some artists to think they have to fill nearly every minute of it to make their product worthwhile. More often than not, the listening experience becomes unbearably long and riddled with filler. Case in point, even though this is apparently not even on CD yet. Modern-Rock Ensemble is the project of Ukrainian composer, poet, keyboard / guitar player and producer Vladimir Gorashchenko, and their second release Night Dreams and Wishes is a 78-minute suite filled with just about everything one can think of, good and bad, about progressive rock: beautiful compositions and strong playing, bombast, several ten-plus-minute tracks among many shorter ones, operatic singing, spoken poetry over the music, good vocals, horrible vocals, even a nearly thirty minute suite within the 78 minute suite, and more than anything, ambitious ideas that mostly work — but occasionally the cringeworthy excesses will make the listener want to leave the room or cover their ears. Gorashchenko composed everything here, as well as playing keyboards and synths, acoustic and electric guitars, 12 string and nylon string guitars, recorder, and lead and backing vocals; other players include Max Velychko (additional guitars on one track, drums, tympani), Enver Izmailov (tapping electric guitar and ebow, on this track or that), drummer Evgeniy Selezniov, fretless bassist Igor Zakus, fretted bassist Dmitriy Trifonov, Bogdan Gumenyuk on saxes and flute, plus various other players and vocalists featured on one track or another. Anastasiia Gorashchenko sings all the female voice parts throughout, though there is also an eight-piece choir and five-piece string ensemble. Like I said, this is ambitious. The opener “Intro – Night, Universe, and Our Inner Space” and its follow-on “Overture” are entirely instrumental, and quite nice. Then we hit the first long track – eleven minutes of “Night Comes Dreams,” with a short male / female vocal section near the beginning, the rest being entirely instrumental, leading into the two-minute classically influenced “Barocco Scherzo.” So far so good. “Childhood – School Days” is another eleven-plus minute piece, mostly a show for keyboards and synths, but it’s all over the map, mostly excellent, but the vocal section that kicks in around the seven minute mark is positively awful. With “Insomnia” we get another pastoral instrumental piece with flute, guitars, vibraphone, and more that approaches jazz as it traverses its near four-minute duration. Then we get to the three-part, thirty minute “Dark Kingdom – The Evil King” which starts with a bombastic instrumental section with supporting strings and choir, bursting into rock at around the two minute mark, but the spoken vocal section makes me want to run and take cover, as do certain parts of parts 2 and 3, even though there are some nice instrumental sections therewithin. There are three more cuts after the “Evil King” suite, but by this time I’m barely able to stand this musical overdose any more. The last track is titled “Want Some More.” The answer is no.