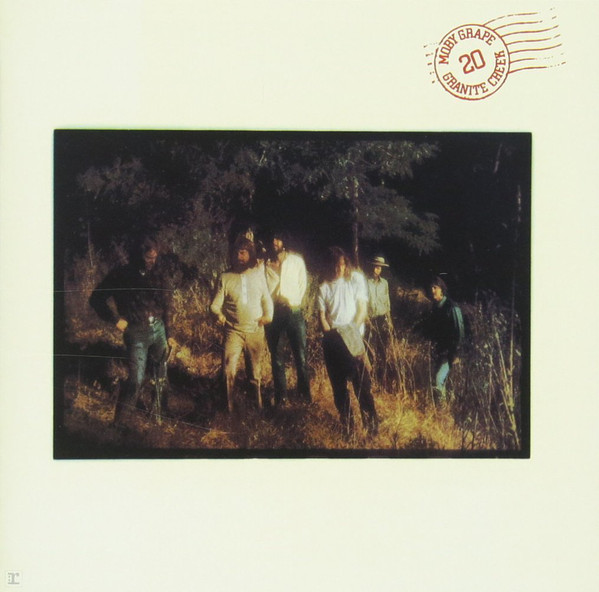 Moby Grape was perhaps the most talented collective of all the late 60s San Francisco bands, as one listen to their self-titled 1967 debut or their second (Wow from 1968) will certainly confirm. Guitarists Jerry Miller, Peter Lewis, and Skip Spence (the latter who had drummed on the first Jefferson Airplane album) were all talented and creative songwriters, along with bassist Jim Mosley and drummer Don Stevenson, and every member would take turns singing lead. But their star burned fast and bright, and by 1969 they were struggling to keep it going, the two albums released that year, Moby Grape 69 and Truly Fine Citizen, were both decent efforts by the remaining members after Spence lost his mind and was forced out of the band. By 1971, all the original members got back together, including Spence, but time had passed and their legacy was all but forgotten. Still, 20 Granite Creek (the address where two of the band members supposedly lived in the hills behind Santa Cruz, CA) is a solid effort with eleven superb tracks written by the various band members. Gordon Stevens (viola, bobro, mandolin) was added to the line up, along with producer David Rubinson, who played electric piano on many of the tracks, plus several other guests, track depending. Some of the cuts, like Miller’s “Roundhouse Blues” and Lewis’ “Goin’ down to Texas,” show a more country-rock sound that had also been there on the previous two albums, while opener, Mosley’s “Gypsy Wedding,” and “Road to the Sun,” and Miller’s “I’m the Kind of Man That Baby You Can Trust,” reflect the roots rocking energy of their early albums. Perhaps the most unusal tune on the allbum is Spence’s “Chinese Song,” a near-six minute instrumental where Spence performs on koto. Stevenson’s “About Time” is another interesting piece featuring a steel drum solo by guest Andy Narell. This album was reissued briefly in 1990 by Linea records, but it was withdrawn almost immediately due to lawsuits from the band’s former manager. This Japanese reissue on the Reprise label represents the first time the band’s fifth album has been generally available on CD. And a fine album it is.