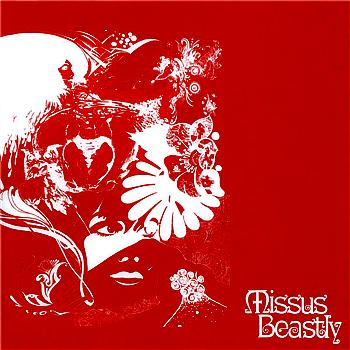 Missus Beastly arose in Germany’s late 60s psychedelic, revolutionary underground scene which also produced the better-known Xhol and Embryo. As the extensive liner notes for this reissue of their first album explain, the band’s early live performances were spontaneous happenings, and when they got into the studio in 1969, they didn’t know what to do. So they fell back on some loosely composed blues-based numbers like “Uncle Sam” and “Mean Woman,” jammed a lot, and fiddled around with studio effects and editing. Petja Hofman (bass) and Lutz Oldemeier (drums) lay down sketchy backgrounds for the guitar of Atzen Wehmeyer and Wolfgang Nickel’s keyboards. Apparently, much of this material was not part of the band’s live shows, and extensive personnel changes after the debut make this an especially fleeting chronicle. The musicians, while not virtuosi by any means, play their instruments with an exploratory spirit that often comes through. Missus Beastly went on to record a number of other albums (including another self-titled one from 1974), most of which are more highly regarded than this one, but it is interesting to get a glimpse back into a long-lost time and place – the early days of proto-progressive improvisational music – so this is likely mostly of interest to collectors and existing fans. (Incidentally, there was a bootleg edition of this debut album released in the 70s with the nonsense title Nara Asst Incense, and this record is sometimes known by that name.)