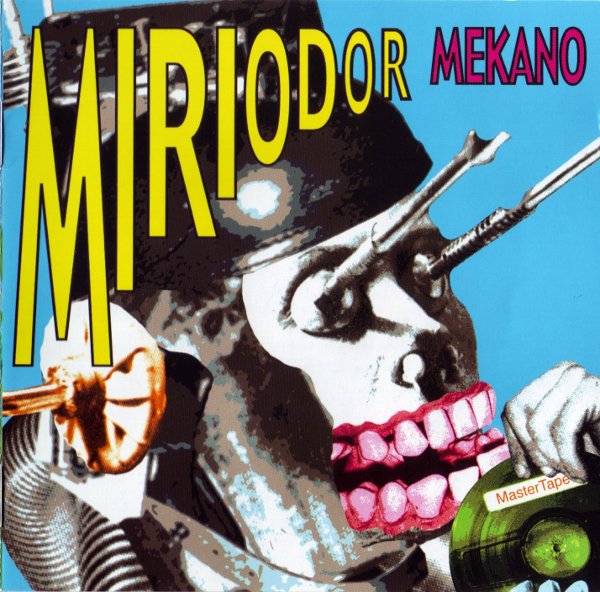 In the first few seconds of Miriodor's latest work you'd almost think the French Canadian group had fallen into an Aphex Twin dub experiment. But it's just a short introduction into familiar groundwork for the accomplished ensemble who continue to refine their sound each album with changing personnel. Guitarist Bernard Falaise shreds on this album, unlike recent works such as Elastic Juggling, where their band's tenet seemed like a mad carousel ride that you couldn't jump off. Sax player Marie Chantel-LeClair holds her own in the mix amidst layered synths and drums and a few odd counterpoints such as on "Bugs." For a twenty-year-old band, there are multiple infused styles including the Dixie Dregs on a few tracks. The fifteen pieces represent a consolidation of sorts where the whimsical French tone which permeates the band merges both Canterbury Brit and modern symphonic elements into a modern eclectic amalgam. The use of marimba and percussion is similar to that of Pierre Moerlen (circa Angels Egg). Plus most of the songs contain quick transition points showing a Kerry Minnear (ex-Gentle Giant) approach to arrangements such as on "L'Inévitable." Now that the group has agreed to appear stateside at NEARfest 2002, it's simply a matter of time until stateside fans become awestruck with Miriodor's clockwork.

Miriodor is one of the truly outstanding avant-prog bands of the last two decades, and this new release shows them in as strong a form as ever. This time the core trio of Falaise, Globensky, and Leclerc is joined by Nicolas Masino on bass and keys, with guests on sax, violin, and trumpet. Many of the musical ingredients are similar to past releases; irregular, shifting phrase lengths, circus-clown organized chaos contrasted with dead-serious steadiness, and angular melodies, although here the harmonic vocabulary tends to be inventive but not overly dissonant. Themes are often composed of instrumental fragments shared between the instruments, with arrangements that reveal more of themselves with every listen. Few other bands (Gentle Giant comes to mind) produce rock music so dense and yet so listenable. While it’s true there are moments you’d expect where this sounds like Univers Zero on acid performing the soundtracks of Saturday morning cartoons, compared to Jongleries Élastiques this is a somewhat less zany outing. The approach is a bit more serious, a bit more rock (although jazz influences persist) and maybe a bit more consistent and mature. At times playful, at times noisy, at times demented, but always compelling, this is an essential release for 2001.

I¹d lost track of this French Canadian group since I first heard their debut release, Rencontres, several years ago. I was impressed with what I heard then and I remain impressed with this new one. Miriodor are easily classifiable as an RIO band, demonstrating quite well what happens when musicians weaned on Stockhausen, Brecht, and Bartók pick up rock instruments and write and record music. Mekano is stuffed with 15 tracks, though none breaks six and a half minutes (one in fact breezes by at 28 seconds!) and all are exquisite gems of RIO wizardry. Today¹s group comprises a guitar / bass / keyboards / drums core that is now augmented by a violinist and saxophone player, both put to good use. Violinist Marie-Soleil Bélanger¹s seductive playing on "Mine of Nothingness" especially charmed me. This track plus several others will bring to mind Gentle Giant at their more meditative though by and large this is a collection of barnburners. Songs like "Bugs" and "The Ghost of M.C. Escher" lay it on hard and heavy, comparable to Thinking Plague though with even more twists and turns than that band usually indulges in. A sense of the absurd can be seen on songs like "The Warlock," with passages that can only be described as silly. Nothing sticks around for long though and before you know it the band is chasing after a completely different idea. This is music to be listened to in order to be appreciated though the rewards are more than worth the effort.