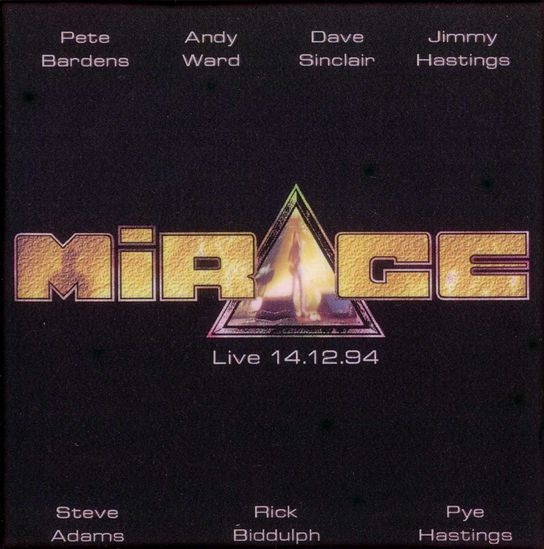 Another reunion dinosaur roars back to life? Mirage has come out from the near Jurassic age, taken a single step forward and unfortunately appears to die on the spot! Whereas Camel and Caravan were carnivores, Mirage is as much a blur as their name implies. This two-disc set chronicles possibly their only European tour from late last year with mixed results. The lineup is probably the most important thing to get excited about: half ex-Caravan (Pye Hastings, Dave Sinclair), half ex-Camel (Pete Bardens, Andy Ward), augmented with Rick Biddulph from Caravan of Dreams and the talented, aged Jimmy Hastings. Rookie status is accorded to Steve Adams who also happens to be the most pleasant surprise out of the live set. There are a few musical high points to elaborate on, too: the odd Caravan medley works as a jazzy sendup of some of the stronger instrumentals of that group's repertoire. "In Dreams," "Speed of Light," and "Lizard on a Rock" (Barden's solo material) are very complacent endeavors for this group to play – more plant eating! However, Adams' fresh approach to interpreting Andy Latimer's fretboard territory gives the Camel tracks a few choice bites and favorable, unfamiliar twists. It's great to hear him stretch out on a set list which included such classics as "The Sleeper," "Skylines," and "Freefall." Some midpoints of interest also are present: Biddulph's bass is a solid foundation, but there is little interplay which characterizes Ward's driving work with Camel or even Caravan of Dreams. The real dregs of the set lie in the overall energy of the group, pretty low key and listless. Vocals are extremely weak overall: "Tell Me" is a big disappointment. The real disaster belongs to a cover of Matching Mole's "Oh Caroline." What were they thinking? This rendition lacks the charm of the original and comes off as utter cheeseball due to a sad rhythmic adaptation.

In final summary, this live show is a tepid representation of a splicing of projects without a core group identity. R.Sinclair was mysteriously absent from this recording: maybe he bailed after realizing how bad this project attempt really was. I wish I had something more optimistic to say about this disc. I suppose we're lucky not to have seen this tour come to the States and end up jilted with the heroes of yesteryear boring us to tears today. I'll wait for the new Camel album instead. This dig site has been mined out!