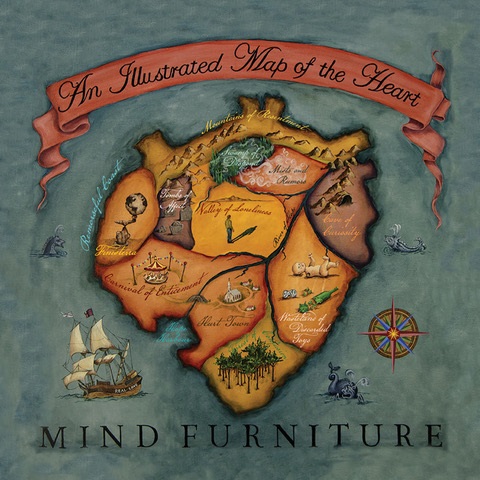 Mind Furniture is an interesting Bay Area band that’s been around for years, but haven’t released that much product during their lifetime. In fact this is only their third release, fourteen years after their second album, Hoop of Flame back in 2007. Mind Furniture is in some respects another spinoff of the band Metaphor, although lead singer John Mabry was always a member of both bands. When Metaphor ended, Mabry went to Mind Furniture full time along with drummer Greg Miller, and bassist Jim Anderson remains a member of both Mind Furniture and Isobar, the band started by other former members of Metaphor. Keyboards are handled by Brett Barnett, and at this point the band has no regular guitarist, although seven different guitarists from other bands contribute to the album’s eleven tracks, which evinces the fact that there is a lot of guitar power throughout. Their sound could be considered a more modern flavor of mainstream prog, which is at once catchy and intense, but doesn’t waste time trying to sound like things that were done five decades ago; but if one listens closely, their progressive roots are clearly evident. What sets An Illustrated Map of the Heart apart from other so-called prog albums are the first-person deeply personal lyrics that detail the trajectory of a relationship, from longing for to finding love, then having it all go wrong, to ending, ‘consumed by the flame,’ with lyrics so intensely emotional, befitting Marillion’s Clutching at Straws or perhaps any early Harry Chapin album. Songs like “Can’t Find My Heart,” “I Broke It” and “Except for Last Tuesday” underscore the troubling aspects of a relationship as told by the album’s protagonist. It also stands in stark contrast to most prog lyrics that deal with moonlit knights, starship troopers, dust in the wind and the like; the lyrics here can’t be ignored and may make some listeners uncomfortable. Another noteworthy cut that stands in contrast to all the others is “I Hate the Way You Make Me Feel,” where guest singer Anne Feinsod joins in something of a back and forth with Mabry, while the eight-piece Barrelhouse Jazz Band takes over the song’s arrangements, providing something of a diversion from the rest of the album. Still, with An Illustrated Map of the Heart Mind Furniture has taken a road less travelled, and from it produced something exceptional.