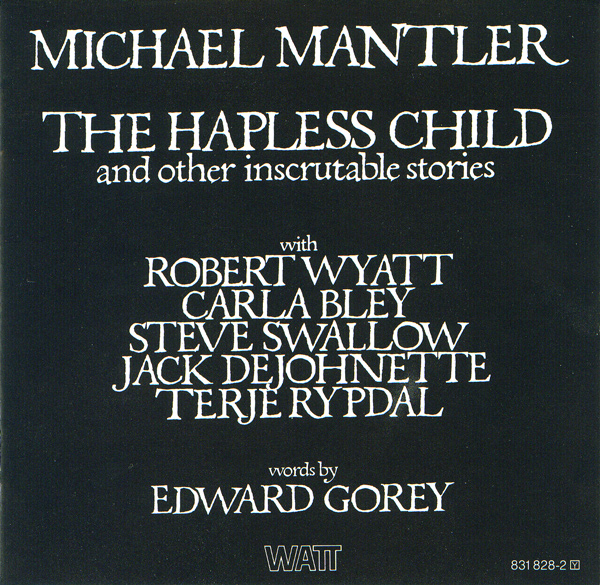 It's a rare project that extracts elements of the written word and transfers them eloquently to an audio performance. Composer/trumpet player Michael Mantler's first major success with this approach was with 1976's star-studded adaptation of the twisted children's stories of Edward Gorey. Who better to relate the tales of woe than Robert Wyatt with Terje Rypdal on lead guitar backed by a crackshot jazz rhythm section including Steve Swallow on bass and Jack DeJohnette on traps. Mantler's then wife, Carla Bley handled the keys on the album, providing a solid piano foundation (and her use of fuzz Clavinet). Rypdal's tortured guitar adds a presence of tension and dismay to each track on the album. His brief solos on "The Insect God" and the title track are some of the high points of the disc. The interplay of Bley/Swallow/DeJohnette is also a constant joy especially on "The Doubtful Guest." Probably the most upsetting pieces on the disc are the final two, if only for their imagery and impassioned delivery: "The Remembered Visit," which features an odd promise made after meeting with an old man. While on the title track Wyatt is at his more dire and forlorn as he croons the tragic story of Charlotte Sophia. Regardless, the album is a seminal work and holds up to the test of time as high art with an unsettling vision of its disturbed characters. The six stories can also be found separately in Gorey's bound work, Amphigorey where the imagery is visualized with his drawings. The Hapless Child is one of my top ten re-releases of the year.