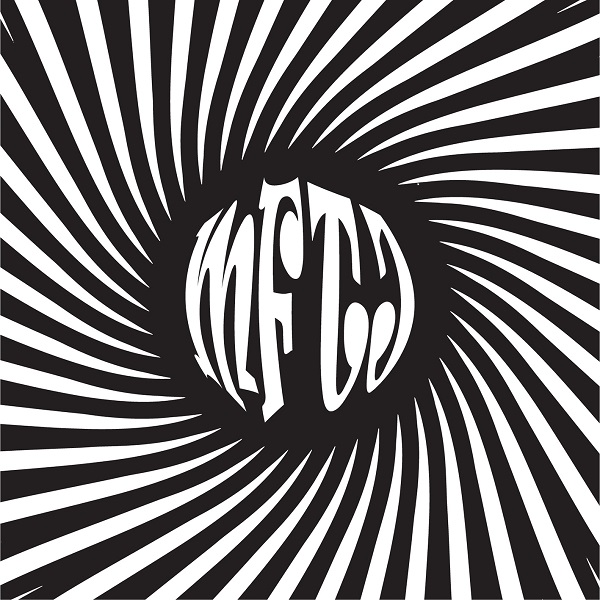 MFTJ is the new instrumental duo of Scott Schorr and Mike Keneally; the later played guitar for Frank Zappa many decades ago and since then spawned an amazing solo career as well as many offshoot projects with various collaborators. Scott Schorr is best known as a producer of prog releases, including Levin Minnemann Rudess, Levin Torn White, and three solo records by Marco Minnemann, among others. Here Schorr plays drums, percussion, and keyboards, while Keneally plays guitar, bass, and piano, along with some noises and sounds – pergaps the spoken word parts just under the surface on “Call of the Corn” and “Crawling Sensation” are him too. The ten tracks here are guided by an intense rhythmic component, heavy bass working with the drums through a variety of styles that may include elements of prog rock, funk, jazz-rock, hip-hop, and psychedelic sounds. Without a lot of subtlety, the duo jumps right into the fire on the opening track “Liquid and Fumes,” which like all of the tracks here is written by both Keneally and Schorr, and arranged by Schorr. The duo’s modus operandi is typically to hit hard with a groove and worry about melodies and textures later, though one can always count on some brilliant and clever solos from Keneally somewhere in each piece. “Bitchy Hawk” builds from a piano line which is soon covered up by by catchy rhythms and intelligent chaos, though not before they punch through the walls and blow the roof off. There are no guests on any of these cuts, messrs Schorr and Keneally do it all themselves, with much of the recording done in Australia and New Zealand, as well as in El Cajon California. “Johnson Figleaf” begins with some gentle psychedelic sounds before cutting into the groove, though in an interesting and less intense way – the heavy got left at the studio door for this one as it stretches out for a near five minute ride. “Magnificent 17” rides along with more of a rock groove bringing in some twisted up guitar sounds in conversation with the synths, making for an enjoyable ride. All taken, the ten cuts here make for an interesting and explorative set that should satisfy even the most the dauntless listener. Oh, and what does the group name stand for? Mankind's Final Traffic Jam.