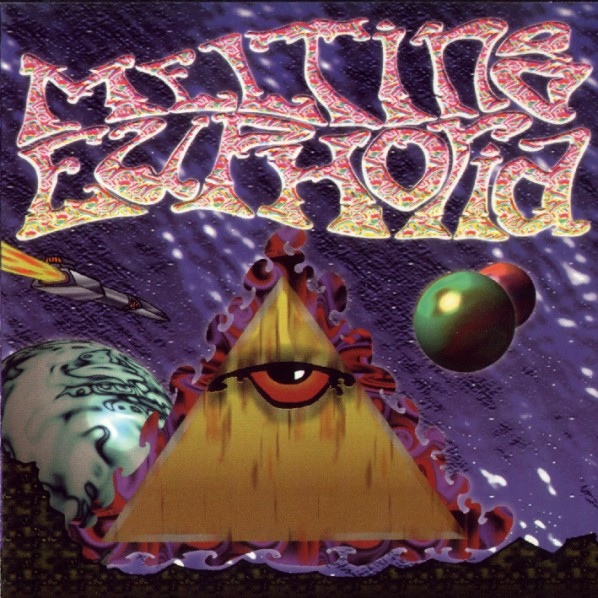 In the beginning there was LSD; San Francisco responded with music. The psychedelic music of mid-late 60s San Francisco reached across the ocean to the UK, and touched bands like Pink Floyd and Hawkwind, which in turn reached across the channel and influenced bands like Tangerine Dream, Gong, and Amon Düül. But eventually the drugs of choice changed from psychedelics to heroin and cocaine, and the psychedelic spirit was nearly lost – and were it not for a young band from Wales in the early 80s, influenced by the music and lifestyle of Gong and Hawkwind a decade or more earlier, the current resurgence of space rock in Britain might have never happened the way it did. But the Ozrics changed all that forever, and helped create a whole new cycle of trippy music updated with all the technical trappings of the 90s. Now, thirty years later, that music has reached back across the ocean again, to San Francisco where it all began. Melting Euphoria is a five-piece of guitars, bass, drums, spacy electronics, and cosmic whispers, with a sound squarely in the psychedelic space rock realm inhabited by Ozrics, Hawkwind (and its numerous recent spin-offs) and Hillage-era Gong. Female vocals are essentially wordless or muted, and don't overwhelm the overall effort, thus liberating the spirit from the anchoring tendencies of lyrics. To be sure, their style is perhaps a bit more drifty and unstructured, technically updated for the nineties, but hallucinogenic just the same – mostly due to the ever-present synth dweedling. It's a groove that fans of all the aforementioned bands should be able to get into and flow with. Recommended.