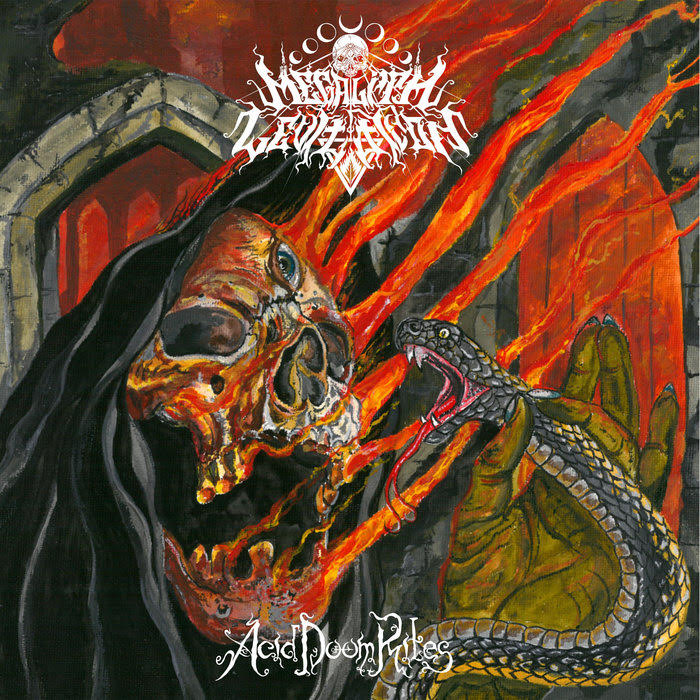 With a name like Megalith Levitation and an album title Acid Doom Rites, you can be easily prepared for a onslaught of sludge rock. Megalith Levitation materialized from the acid vapors of Chelyabinsk, Russia in April 2016. They slowly honed their style on hellish grindstones and released their debut album Acid Doom Rites in September 2019: four long tracks with a total time of one hour and seventeen minutes. I know, this can be a bit much with endless mind-numbing repeated bass riffs and thunderous distorted guitars, but the trio of SAA (sermons and fuzzmagic), KKV (thunderbass), and PAN (skullhammers) do manage diversity between the tracks. Since it is difficult to sustain the monotonous riffing for extended periods, Megalith Levitation will change things up a bit mid way through each track. For example, after nearly eleven minutes of distortion and sludge on “Eternal Trip / The 4-th Plateau,” the music evolves into a cool psych jam. I do have to agree with the promo material that the title track is the best on the album, it is the most accessible track, but still dark and doom-laden music. The closing track, “Smouldering Embers / Pyromagic,” clocks in at roughly 23 minutes and does have a cleaner sound. But what a relief when it is over! The sonic overload on the ears and brain is overwhelming. Though not for everyone, you might find this album useful if you want some mindless background noise at a low volume.