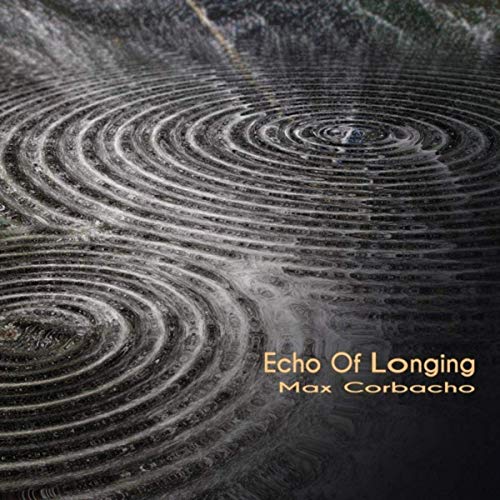 Offering a powerful sense of otherworldly ambient drift, Max Corbacho’s latest Echo of Longing was created over a four year period from 2015 to 2019, released near the end of last year. The 70-plus minute album contains only three extended tracks that will guide the listener into deep space ambient realms, through the fog, the gentle starlight, and the subtle shimmering sounds of epic expanses. In fact two of the three long cuts fold and blend together at the edges, and a listener may not likely know when one track meets the next other than a subtle change of feeling that follows with realization long after the transition has completed. Corbacho is an independent sonic sculptor who comes from the Badajoz province in southwestern Spain and has been releasing his music privately since around 1998, with nearly two dozen releases to date; his stock in trade (at least based on several previous releases I have heard) is long form epics of dense and hypnotic sonic landscapes that are strongly reflective of the subtleties of the natural world, immersive in every way, with a powerful sedative nature that will drop the listener into a magical and mysterious world that connects human existence with sounds of meditative self-discovery. While the three pieces could be described as floating ambient minimalism, there are all manner of sonic details that seem to be active just below the surface, constantly changing the contour of what is heard, mirroring the warmth and coolness, gentle breezes, and subtle waves within the sound, all coming together on a number of levels, constantly inviting the listener in for a cosmic deep dive. While the music here is entirely synth-based and atmospheric in form, it tends to invite comparison to some of the work of Steve Roach, the softer and gentler ambient efforts of Forrest Fang, as well as others in the same cosmic element. Echo of Longing is a powerful and authentic soundworld that captures the soul and the spirit.

Satoko Fujii Quartet - Zephyros – Maybe it’s meant as a challenge to the listener, maybe not, but pianist Satoko Fujii has placed the most difficult track on her latest quartet offering first in sequence, as if saying, “You made...  (2004) » Read more