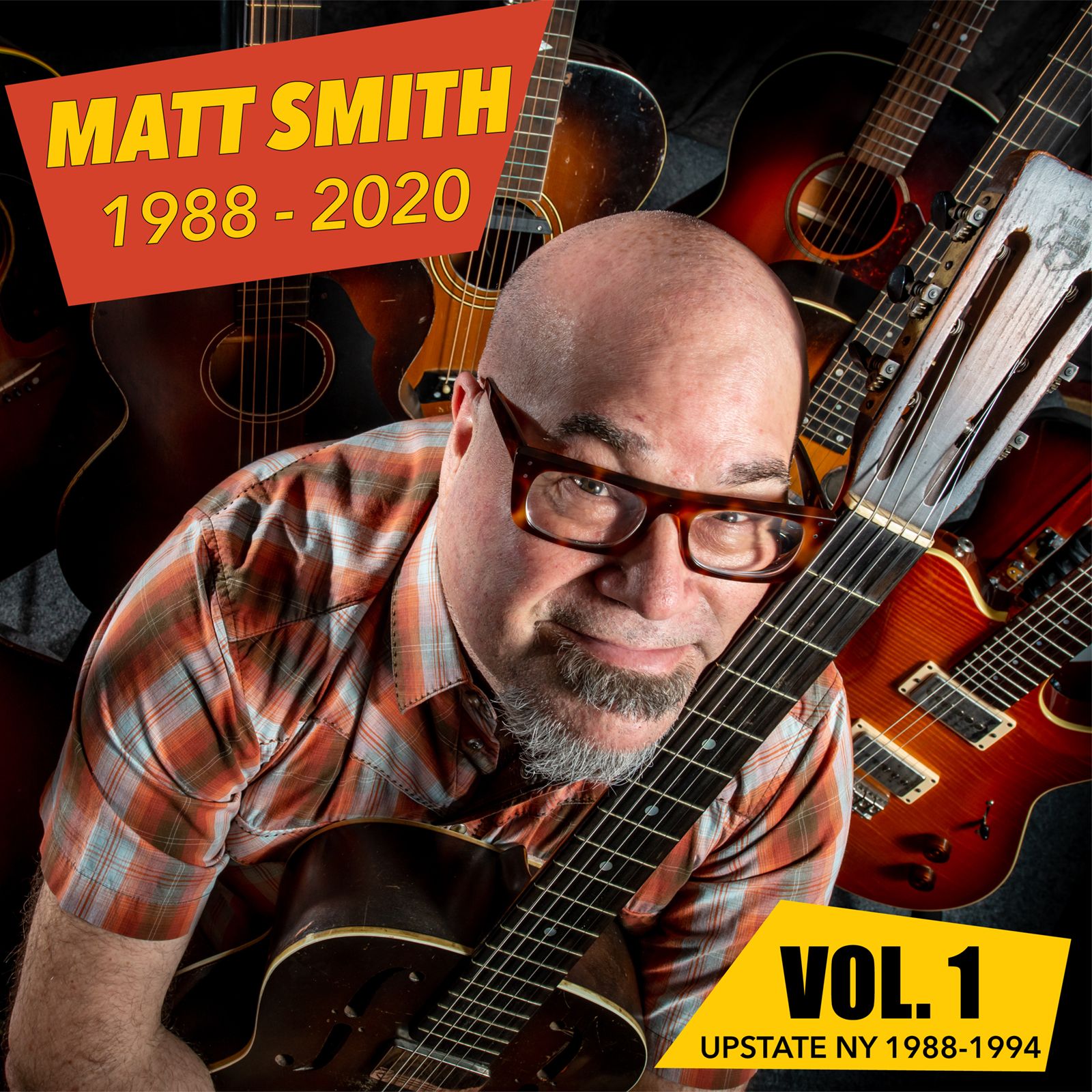 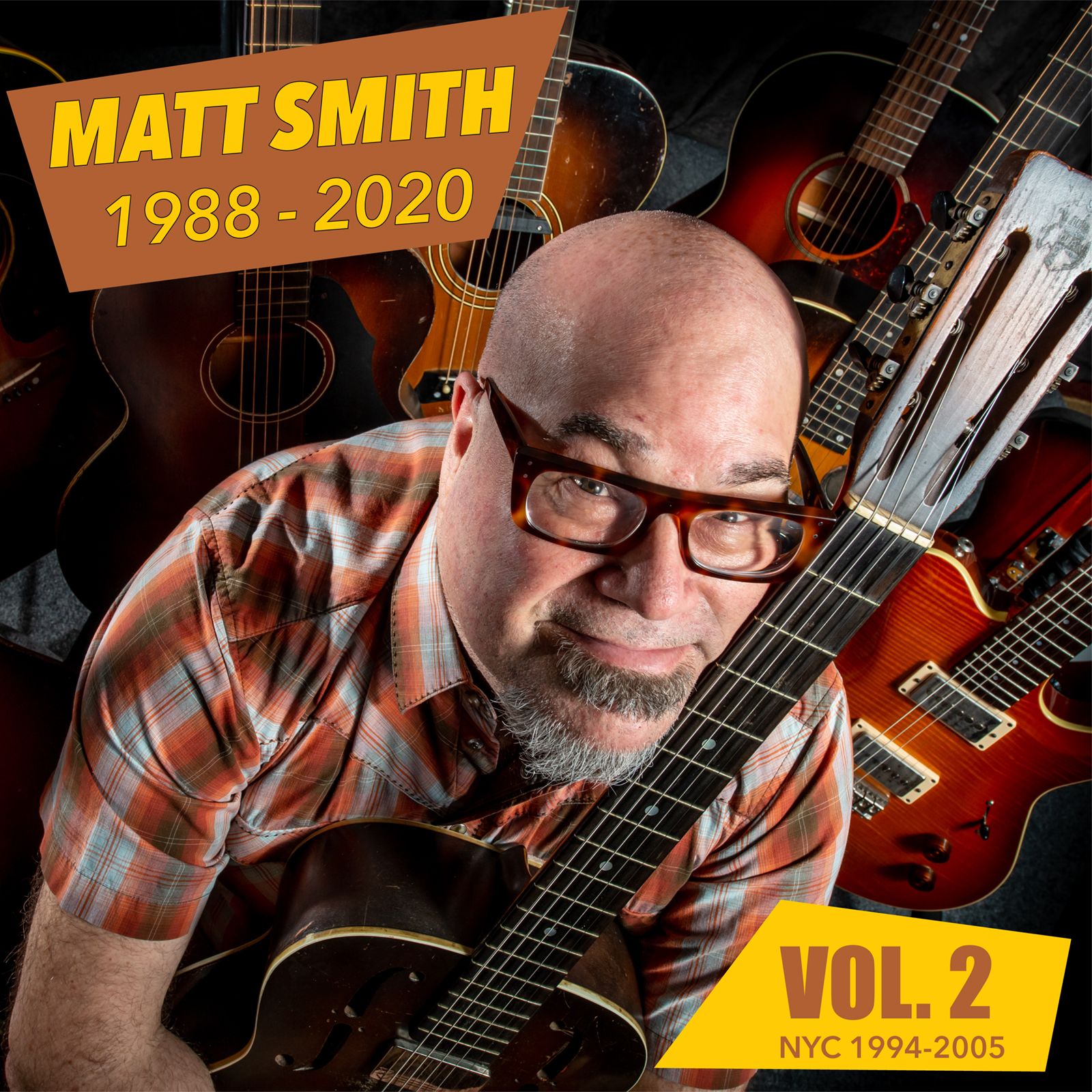 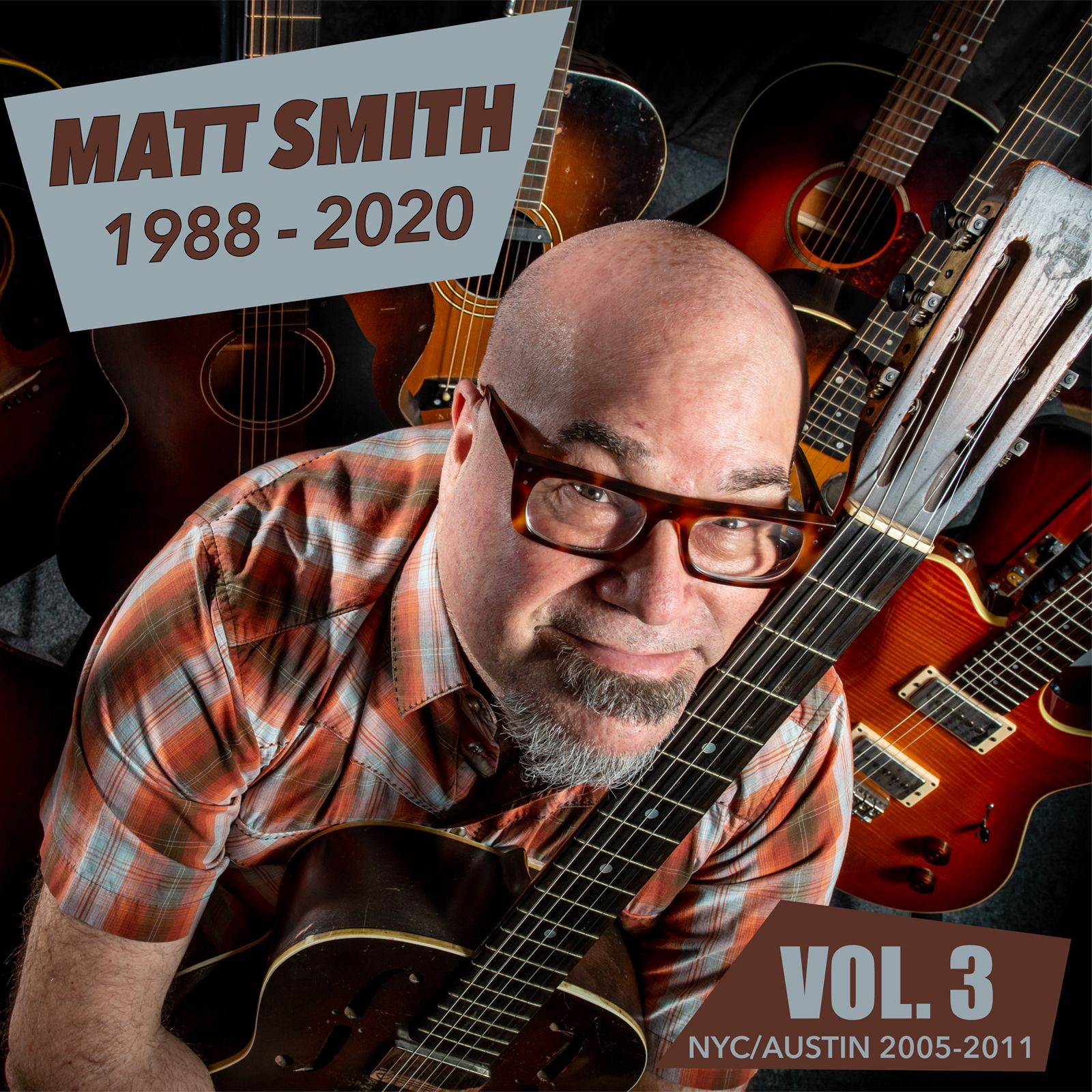 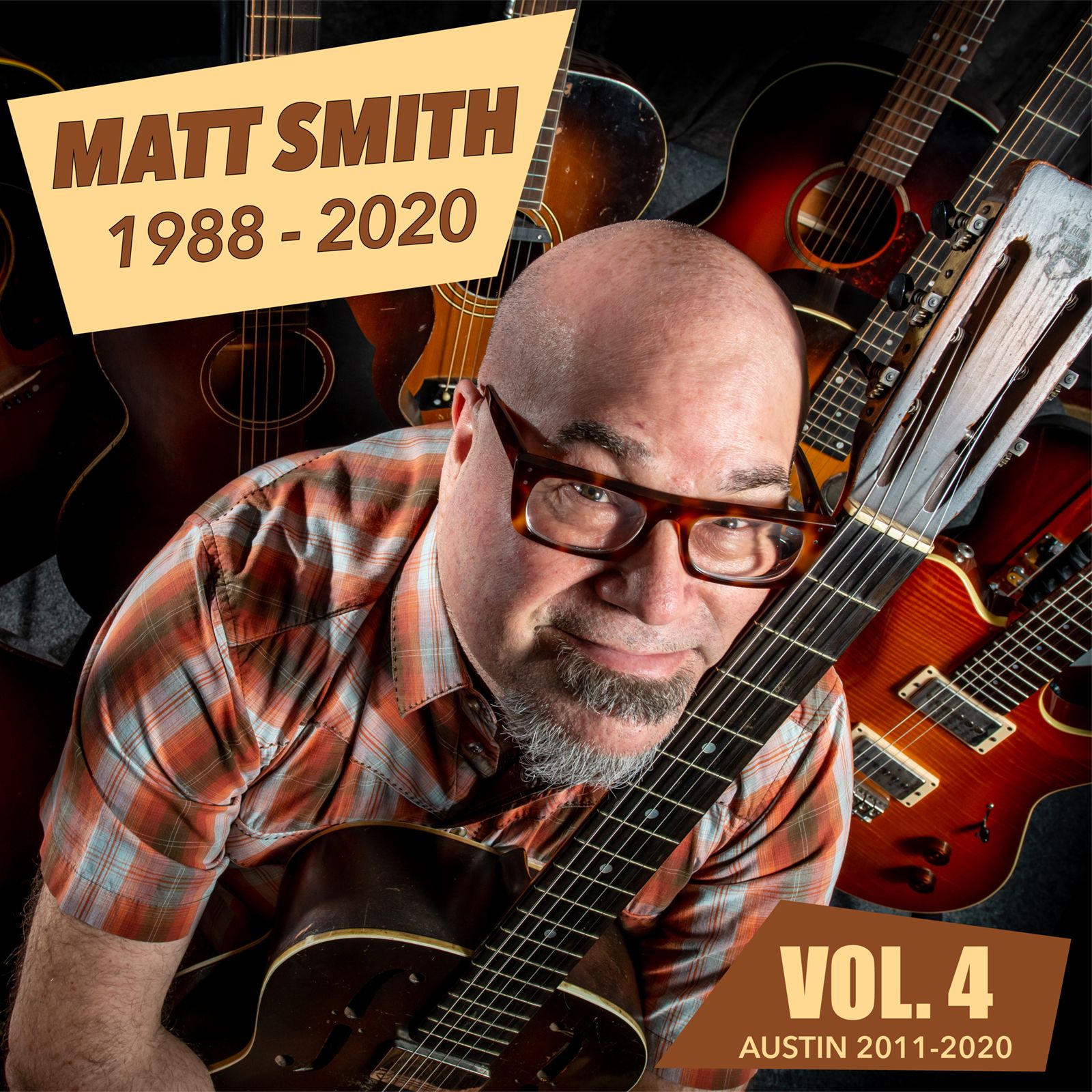 Perhaps you’ve read some of the recent reviews we’ve posted of guitarist, multi-instrumentalist, bandleader and composer Matt Smith of the 6 String Ranch in Austin, Texas. He’s had a long career spanning from the late 80s to the present during which time he has fronted a number of different bands in the Northeast and in Texas, and released a number of recordings with many of them. At hand are the four remaining CDs (of eight total) that were all released on September 11th 2020; two studio discs (Parlor and Being Human) and two excellent live albums (Chop Shop Live at Strange Brew and Matt Smith’s World Live at the Saxon Pub) have already been reviewed in the weeks since their release. Now we have four more discs, compilations of sorts, each dedicated to a chronological place and time in Smith’s career, each containing excerpts from three to four albums during the place and time represented therein. I should say at this point that with the exception of Vol.4, I haven’t heard any of the original albums that the tracks were culled from; from what I can gather they are all out of print on any physical format, but a quick look at Smith’s website shows that at least some of the original albums are (or are soon to be) headed for re-release as digital downloads.

We start with Vol.1, which contains material pulled from four albums he recorded while living in Upstate New York from 1988 to 1994. The three taken from the album Matt Smith Band represent his earliest recordings in this set, pretty much comprised of straight-up rock sounds with a healthy dose of jazz, funk, and blues infused, superbly composed and performed, featuring a core of guitar, bass, drums, and keyboards with added horns, and presumably Smith on vocals. Of the three cuts presented, “Shine Your light on Me” is easily the standout, though the quality of all three cuts certainly suggests that the original album would be a worthwhile find. Three cuts are taken from the album Whisper to a Scream, recorded in 1990, presents even more of a balanced rocker than the debut, but one track in particular, “Lickety Pick,” is a powerful slab of instrumental country rock, reminiscent of the one or two country pickers that Steve Morse used to include on each of his albums (and the Dixie Dregs before that). Two more songs from the album, “House of Fire” and “Falling in Love Again” are included in live form on the selections taken from Live at the Ritz, while the third selection, “Runnin’ Just as Fast as I Can,” represents probably the most ferocious rocker included on the disc. The disc closes with four cuts from Delta Radio, the last studio album recorded by the original Matt Smith Band, released in 1996. Soul and funk seem to be more the order of the day, with saxes, horns and backing singers featured prominently on several of the tracks presented. “After All These Years” is the exception to the rule, based on an acoustic guitar groove, though saxes are still playing a prominent role here.

Moving forward to Vol.2, which represents tracks recorsded after Smith’s move to New York City around 1994 and continues through 2005. Four tracks are taken from the album Black and White, representing a cornucopia of styles, from the heartfelt sadness of “Ballad of the Lower East Side” to the jazzy steel guitar number “Big White Moon.” One thing quite noticable on this set is the general improvement in the quality of Smith’s vocals at this point in his career. It’s a little unclear what the original release date of this album is, but that said all four cuts are nothing short of excellent. Another superb country rock instrumental comes as the title track from the next album, Big Fun, a real guitar stomper with several brilliant solos across its four minute duration. The more laid back instrumental “Greenfield Grove,” nearly six minutes in length, has a very cool bluesy vibe with plenty of slide resonator and mandolin within the many layers of strings here. The swampy blues groover “Ashes on the Wind” opens the set of three tracks taken from the 2002 album Free Beer and Chicken, Smith’s voice at its gravelly best to carry the feeling. Likewise the “Neon Cocktail Night” refrain of “Montreal” brings a swinging country sound to the Canadian night. Brilliant. Next comes Smith’s studio debut with his rock trio Chop Shop, again it’s unclear what the original release date of the album is, but the powerful instrumental “Tough Guy” that opens the set of three tunes pretty much shreds beginning to end, while the Hawaiian styled instrumental “Alo Moana” that follows is quite the contrast with Smith’s steel guitar stealing the show. “Djeet Yit?” is another wild pickin’ country guitar instrumental in the vein of “Big Fun” and others.

Vol.3 is subtitled NYC / Austin 2005-2011, and starts with four songs from the 2009 album What I Feel for You, which includes covers of the classic numbers “Rainy Night in Georgia” and “Don’t Let the Sun Catch You Crying,” the latter in particular a very different arrangement from the 60s original. Other tunes included from the album are “I Wish You Love” and “Save Your Love for Me,” an album which appears to be mostly love song covers. Moving forward to the three selections from Meet the Monstas, we find the original studio version of “Junkie for Your Love,” one of the highlights of the more recent Matt Smith’s World Live album. The acoustic guitar driven “Jesus in Mexico” tells a tale of Jesus entering the states via El Paso, featuring gentle accordion accompaniment throughout. Next up are four tracks from the studio debut of Matt Smith’s World, a larger band featuring saxes, steel drums, and piano / keys, in addition to the usual guitar / bass / drums and Smith’s lead vocals. “Struggle On” and “Six Degrees of Separation” are both great examples of the new band’s sound. “Hot Club of Brooklyn” is a jumpin’ jazz instrumental that’s as danceable as it is amazing, with solos going around the whole band as it proceeds.

Lastly we come to Vol.4, subtitled Austin 2011-2020, starting with three exemplary cuts from Chop Shop Live at Strange Brew, this time the Chop Shop has vocals and some cover tunes like Steve Stills’ “Love the One You’re With,” stretched out to nearly ten minutes. Likewise the other two cuts, “Trust Yourself” and Shades of Grey,” give the trio plenty of room to stretch out and amaze. Following we have four cuts from the instrumental acoustic guitar album Parlor, a very different animal from anything else here. The playful “Daydreams” opens, but the highlight is the beautiful “Isla Mujeres,” only a minute and a half in length but a truly beautiful creation beginning to end. “Traveling Man” closes the set and shows what can happen when Smith’s fast fingers work with nylon strings. Last up are three cuts from the live album Matt Smith’s World Live at the Saxon Pub, “Simple Song” opens, but with “Walk the Talk” they hit their stride, with the steel pan and added percussion making a cool groove for organ and sax to play in. Set closer “Dance with Me” gets the Caribbean groove going across its nine minute duration, with instrumental breaks for every player. All taken these four sampler discs offer excellent examples from the entirety of Smith’s career, but for these most recent releases on Vol.4, the full albums do them far more justice.