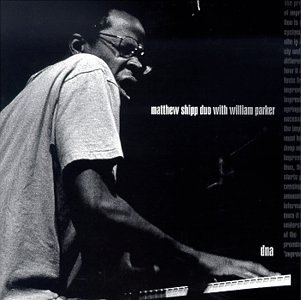 Mathew Shipp has paid his dues in the eastern US jazz circles for the past several years and DNA is his first for Thirsty Ear Records out of New York. Two traditional pieces are included on the disc in addition to five of Shipp's compositions embellished by Parker's upright bass lines. Both of those pieces are spirituals interspersed with songs which reflect a subject matter of the dichotomy between the religious and scientific impulse. Shipp himself appears to be a "spurious" composer - a believer in dissonant interjection, but with less spasmodic emphasis than Keith Tippett or Keith Jarrett. The dialogue between pulse and dynamic is the key in which to exact a crucial interaction if the players are up to the task. How listenable is it then to live in the moment of live spontaneous combustion? I would say it's both revealing and an exercise in the discipline of listening. Rhythmically the interchange between these two musicians is stark and perpetually shifting. "Orbit" is probably the most successful track since Shipp keeps emphasis on the rhythmic chorusing he's establishing with Parker punctuating the bottom line. The opening track, "When Johnny Comes Marching Home" is propelled by Shipp's restatement of the main theme amidst a controlled, if somewhat frantic bass solo. Seven minutes into "Mr. Chromosome" a simple repeating melody is invoked to signal a time to change to a cross sectional improvisation which finishes with an almost calypso like figure and sad resolution. "Amazing Grace" comes as a proud closing statement to the disc, bookmarking the album so to speak. Overall DNA is a successful new excursion for Shipp and Parker and definitely a must see performance in your local jazz club.