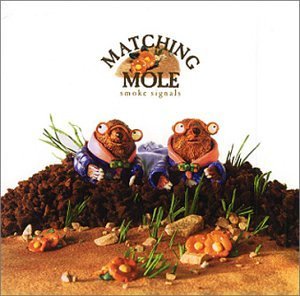 After leaving Soft Machine in 1971, drummer Robert Wyatt planned to record a solo album that featured his songwriting and singing talents. He then enlisted guitarist Phil Miller, Dave Sinclair (of Caravan) on keyboards, and bassist Bill MacCormick, and before they knew it the “solo” album turned into the first Matching Mole record. After Dave Sinclair (who didn’t appreciate the band’s improvisational leanings) left to rejoin Caravan, first album contributor Dave McRae joined as a full-time member for their second album, Little Red Record. This second version of the band is captured in top form on Smoke Signals, which is compiled from concerts recorded in Europe during the spring of 1972. Cuneiform Records maintains their usual exceptionally high standards as the disc was compiled by Mike King (who wrote the Robert Wyatt book Wrong Movements) and the excellent liner notes were written by noted Canterbury expert Aymeric Leroy. The nine pieces are mostly from Little Red Record but there are also some non-album tracks such as Miller’s classic “Lything and Gracing.” If you are unfamiliar with the sound imagine a jazzy early Hatfield & the North in an improvisational mode. Miller’s adventurous, probing guitar lines give the band its sonic identity, but MacCormick’s fuzz bass is also a lead instrument that helps to define the Matching Mole sound. Wyatt’s jazzy but propulsive drumming provides the underpinning for the energetic instrumental flights. These classic live recordings document an exceptional band that existed for only one year but that generated some wonderful music that was a pre-cursor to some of the best Canterbury sounds.