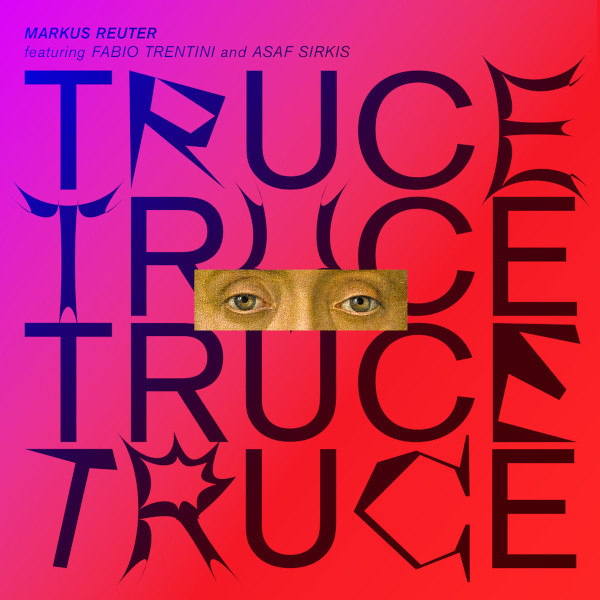 New music from Markus Reuter is always a good thing, whether it’s under his own name or one of the many groups and collaborations he’s involved with. And luckily it’s something that happens fairly often — the man is phenomenally prolific and has a very high success to failure ratio. In fact I can’t think of any real failures at all. With Truce, Reuter is in the company of frequent collaborator Asaf Sirkis, a highly creative drummer with many collaborations of his own. The other contributor to this music is bassist Fabio Trentini, whom Reuter worked with on the Face album with Pat Mastelotto. The result of these three together is quite extraordinary, and a couple of references come to mind: Polytown, the 1994 album from David Torn, Mick Karn, and Terry Bozzio; and Mick Karn’s solo albums from around the same time, Bestial Cluster and The Tooth Mother. On those and on Truce, the dominant factors are atmospheric guitar-like looping, inventive guitar-like solos, and up-front fluid fretless bass. Trentini’s tone and technique are both reminiscent of Karn’s distinctive playing, though I wouldn’t say he’s derivative or unoriginal. There is certainly room in the world for another bassist in this style, especially since Karn left us at much too young an age. Every track is filled with outstanding playing that bridges funky low end, melodic high notes and slides, and experimentation in a most engaging way. Sirkis gets in some of his most assertive drumming ever, setting an energy level that peaks very high, though there are moments of calm and respite to give variety. Much of what we’ve heard from Sirkis before has been more laid-back and jazzy, but here he shows another side to his talent. As for Reuter himself, he is flat-out on fire! Most of the tracks feature his trademark ambient washes of tones fading in and out, but what grabs the listener’s attention are his lead lines and solos, containing some of his most impressive playing to date. He is really becoming a player with his own style, clearly built on foundations of Robert Fripp and others, but with a distinctive voice and tone all his own. I can’t recommend Truce highly enough — it deserves a place on the shelf (either physical or virtual) of every lover of adventurous music.