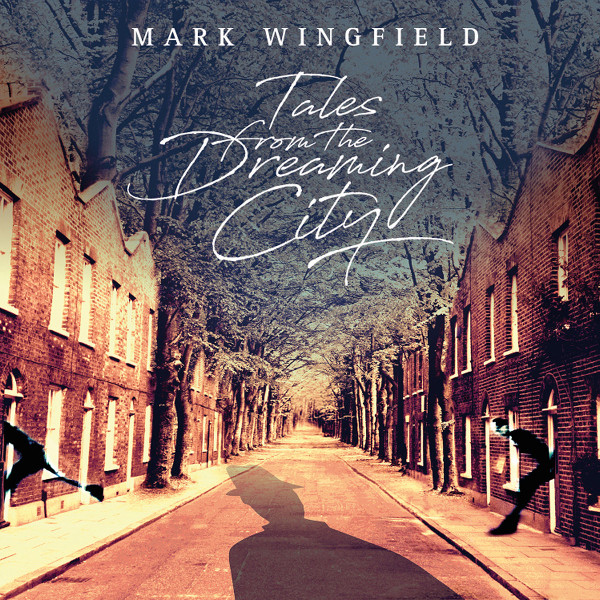 Tales of the Dreaming City finds guitarist Mark Wingfield back in the driver’s seat, leading a band that takes Yaron Stavi (bass) and Asaf Sirkis (drums) from Proof of Light (2015) and adds Dominique Vantomme on keyboards. All are Moonjune regulars, and Tales meets the high standards we’ve come to expect from this crew. This is less improvisational than what we got on The Stone House and Lighthouse, though stylistically and sonically it’s very similar. The open-ended compositions leave the players plenty of room to make the parts their own, definitely approaching them in a jazz mindset. The tracks range from uptempo grooves full of subtle energy to quiet, atmospheric pieces with free tempo. Throughout, it is Wingfield’s unique tone that provides the most distinctive feature. He has a way of bending notes that is unlike any other guitarist, and there’s a weird little quaver he gets on some notes that I’m at a loss to explain. For the most part, he plays slow, expressive melodies punctuated by quick runs, a perfect example of technical facility in service of artistic intent. Stavi and Sirkis provide their usual stellar backing, with Sirkis providing tricky cymbal work that lends an airy feeling during the energetic parts. Stavi mostly provides a low anchor for the tunes, though he does get some opportunities to venture into melodic territory. Vantomme’s contributions are mostly subtle synth washes and textures, with the occasional doubling of a guitar melody. “Ten Mile Bank” is the track where the band gets to stretch out, with both Stavi and Vantomme getting solo spots in addition to the leader. With Tales of the Dreaming City, Mark Wingfield provides further evidence that he is a guitarist worthy of notice, and Moonjune continues a winning streak of superb jazz releases that embody the genre’s spirit while refusing to conform to the limits of the past.