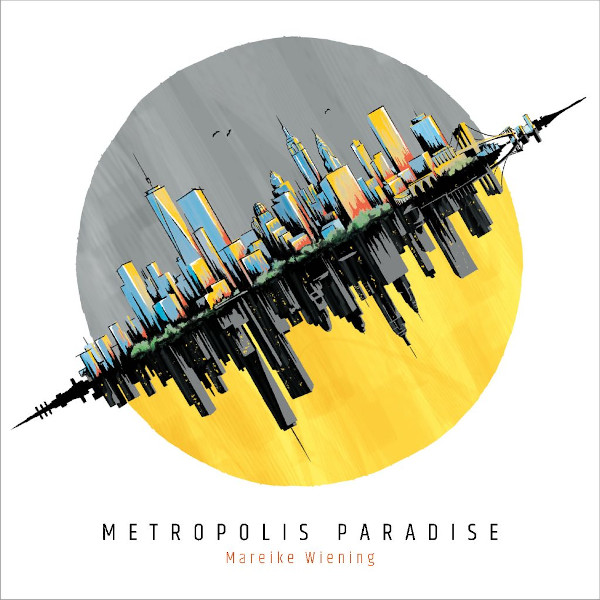 Thinking about jazz groups led by drummers in my recent reviews, Mark Lomax, II is the most prominent, but I’ve also covered Sean Noonan, Jeff Siegel, John Hollenbeck (The Claudia Quintet), Marilyn Mazur, and Adam Rudolph (the latter two perhaps best deemed percussionists). Leaving it there, a wide range of sound is on exhibit, so it’s clearly not fair to make any generalizations about groups led by drummers, or where the drummer is the primary composer. German-born, New York-based Mareike Wiening leads this quintet featuring Johannes Felscher (bass), Alex Goodman (guitar), Rich Perry (tenor sax), and Dan Tepfer (piano), and her music does not at all feature her own playing over that of anyone else. Her playing is imaginative and supportive of the compositions, which are harmonically sophisticated and varied. There are touches of counterpoint reminiscent of classical music, and some lovely unexpected chord progressions. The interplay between piano, guitar, and sax is the highlight of the session, often featuring two of the three handling the lead melody in some form while the third weaves commentary around them. One thing you won’t hear much of is blues influence. Another is raw intensity — if Metropolis Paradise has a flaw, it’s that it’s too polite and centered on moderate tempos. Normally such low-intensity jazz would bore me, but Wiening’s tunes are good enough to keep my interest. While the music not confrontational, it’s also not schmaltzy. Attention is not demanded, but it is rewarded, with plenty of lovely choices in arrangement, and good performances from all the musicians. While I’d love to hear these players go for it with an energetic uptempo blowout, Wiening has proven herself a composer of note with this impressive set of tunes.

The Storm - The Storm – Good old hard rock with Hammond! The Storm was a Spanish four-piece from the early 70s, playing in a style similar to many of their British counterparts of a few years earlier – singing their...  (1995) » Read more