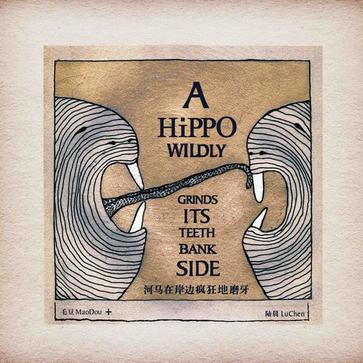 This elaborate package from the Shanghai underground would be worthy of a stateside release on Beta-lactam Ring. Seems perfect: one-of-a-kind presentation, cryptic artwork, bizarre music (and other sounds), confusing (or non-existent) credits. The CDs come packed in a lovely cloth-bound book that has 60+ card-stock pages covered with strange art (photo collages, scribbles, surreal sketches, and so on) and writing in English and Chinese. The discs are stuck on rubber knobs on the fold-out back cover. The first disc seems to consist of material that Mao and Lu gave to some of their Shanghai avant/improv scene compatriots to do with what they would. The results vary widely, starting out with eight minutes of the Beatles’ “Yesterday” repeated over and over accompanied by a music box. If there are any variations in treatment I can’t make them out. Then there is a very brief song with acoustic guitar and bass. We’re also treated to creepy ambient sound treatments from Sun Mengjin and blasts of static, radio noises and demented screaming, courtesy of the aptly named Torturing Nurse – ten minutes of that is guaranteed to clear your house of unwanted guests, and if it doesn’t, you might want to call the cops on those who remain. Obviously a lot of thought, effort, and (dare I say) love went into this release, though it’s honestly hard to imagine there’s much of an audience for it. Disc 2 contains more than 30 minutes of mostly spoken (occasionally sung) Chinese with treatments, found sounds and backgrounds both subtle and noisy. If you’re seeking out extreme art music from around the world, Mao and Lu are here to represent mainland China.

Amorphis - Am Universum – Back when I was in my early teens, I went through a phase where I liked heavy metal. Black Sabbath’s Paranoid was my favorite LP. That phase didn’t last very long, and I haven’t...  (2001) » Read more