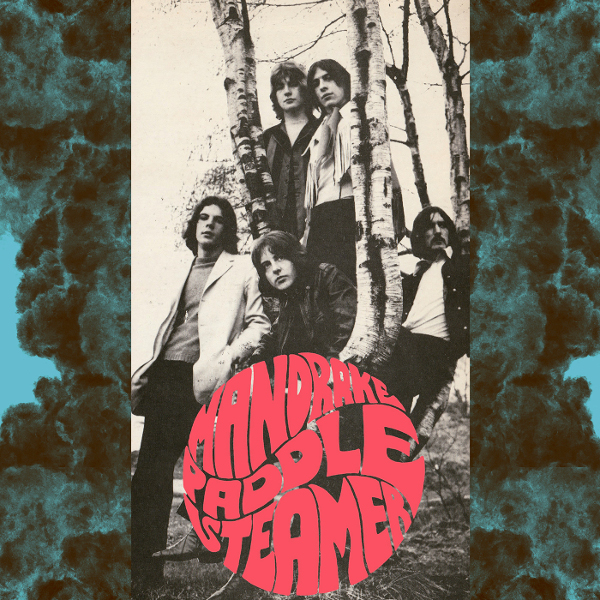 During their short life as a band (1967 - 1970), Brit psych group Mandrake Paddle Steamer opened for the likes of Pink Floyd, The Nice, and Vanilla Fudge, as well as performing at the Isle of Wight Festival. Signed to the Parlophone label, though they really wanted to be on Harvest, they released their single “Strange Walking Man” in 1969, now widely regarded as a lost Brit psych classic. But due to lack of promotion and label support, their single went nowhere, with the band eventually splitting in 1970. Unlike other 60s Brit bands that morphed into psych or prog rock, Mandrake Paddle Steamer was conceived as psych and prog by a group of art school students: Brian Engel, Martin Briley, Paul(a) Riordan, Martin Hooker, and Barry Nightingale (later replaced by David Potts). Pandemonium Shadow Show gathers a number of studio recordings from 1968 and 1970, recorded at various studios around London. Some tracks have been previously released on bootleg albums with inferior sound and wrong titles, while the others have been unreleased until now. As such Guerssen did their best to place these songs in a sequence that flows. Interestingly, Pandemonium Shadow Show is also the name of Harry Nilsson’s second album released in 1967. Harry had wanted to name his album Something Wicked This Way Comes from Ray Bradbury’s novel, but permission did not arrive in time. The Mandrakes apparently loved Bradbury as well, with the new album opening with the hard rocking psych-garage band title track that is named after the circus sideshow from Bradbury’s novel. Plus there is a lyric late in the song that quotes the novel's title. The second song is “Solitair Husk” with throbbing bass and fantastically gothic Hammond organ riff, conjuring visions of vampires. Next is the quiet “Stella Mermaid” that launches of into a seething sea of prog psych rock. This track is followed by the trippy “The World Whistles By” that is heavily dominated by Hammond organ and effects. Then we encounter “Upminster Windows,” which is a combination of Syd Barrett, Pink Floyd, and early The Who, with a number of mood changes across its five minutes. Next is “Doris the Piper” that made me think of The Who’s song title “Boris the Spider,” but the song is entirely different. “Doris the Piper” is a dark, sinister psych rocker in a minor key about the succubus Doris. “The Doorway to January” is a slow bluesy instrumental that reaches a fantastic prog rock climax with great Hammond organ riffing calling to mind The Doors and Iron Butterfly. The album reaches its peak with “Simple Song” that is not at all simple. This instrumental is chock full of interesting lines and solos to create a prog rock masterpiece. The album closes with another Ray Bradbury reference, “The October Country,” named after this 1955 short story collection. This closing song has a rapidly modulating organ, odd structures, and eerie Mellotron for an experimental and trippy song inspired by Bradbury’s stories. Guerssen has done an outstanding job on this reissue that is sure to please all lovers of vintage psych/prog rock.