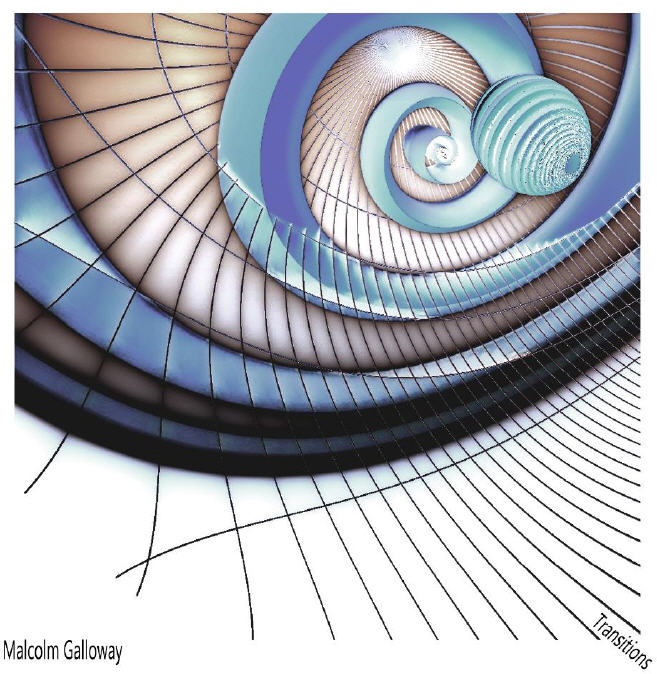 In addition to his work leading the progressive rock band Hats off Gentlemen It’s Adequate, Malcolm Galloway has built up a substantial catalog of non-rock recordings, with Transitions being the latest. The album consists of three pieces in a style related to that pioneered by Philip Glass, with repeated patterns on a variety of instruments. On “Pattern Jugglers,” the instruments consist of two marimbas, two guitars, and (going by sound here) upright bass and some kind of keyboard, with percussion coming in later. The propulsive rhythm flows hypnotically with shifting accents, and even hints at an influence from Mike Oldfield. It builds up over the course of more than seven and a half minutes in a very satisfying way. It’s one of the finest examples of this kind of minimalism I’ve heard, certainly calling to mind such masters as Glass and Steve Reich, but not copying them. “Slow” is a change of pace, with long string tones coming and going in an eerie atonal wash, with sparse notes on piano and some clarinet-like notes coming and going like half-glimpses figures on a misty night. The album finishes off with “Transition,” clocking in well over a half hour in length. Once again, we get a quick tempo with repeating cells, this time starting out with organ and piano sounds, adding in guitars and marimbas. As the piece progresses, there are gradual changes in both instrumentation and in the patterns themselves. Around six minutes in, we start hearing percussion, and a few minutes later, long string tones sneak in. Obviously, Transitions is not music for people in a hurry, but when you’ve got the time, it’s wonderful to just let it wash over you, taking in its joyful energy.